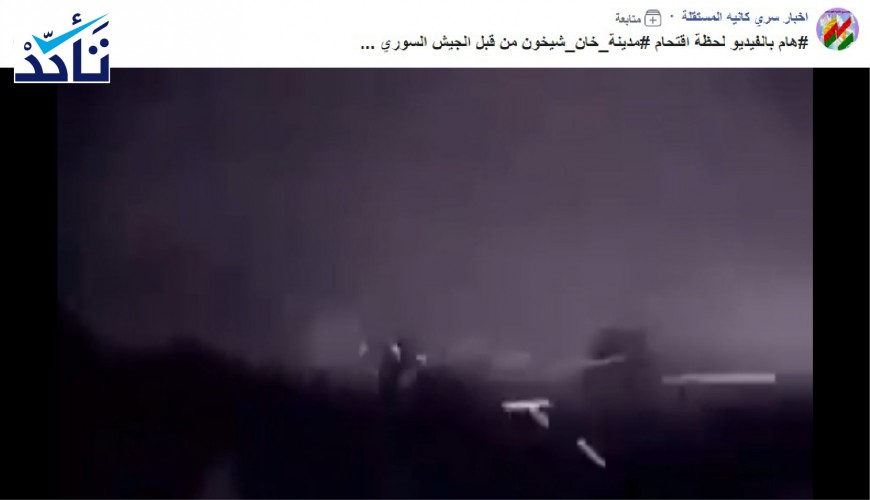 A video, which has been claimed to show regime forces entering the city of Khan Shaykhun in Idlib’s countryside, circulated on social media. YouTube channels have also circulated the same video claiming that it shows an ambush against Assad forces in the same city.

The video shows what it seems to be heavy gunfire from different sides. Details of the place and time of taking the video are not available.

Verify-Sy inspected the video and reached the conclusion that it is unrelated to the battles carried out recently by regime forces to seize control of Khan Shaykhun. YouTube channels has circulated the video in 2016 and said to be of clashes in Ukraine.

Today, social media pages circulated another video claiming that it shows bombardment on Khan Shaykhun city. However, a reverse search of a screengrab from the video shows that it has been circulated last May and said to be of bombardment targeting the areas around Kafr Nabudah town in Hama’s northwestern countryside.

Verify-Sy was unable to verify when or where these two videos were taken. However, the fact that they were circulated previously refutes the claims that they show the clashes that occurred recently in Khan Shaykhun city.

Besides, social media pages circulated a video of a person making a speech in front of persons wearing military uniform. They have claimed that the person is “Abu Amsha, commander of the so-called al-Sharqiya Faction, attempting to raise morale for combatants who will participate in defending Idlib.”

Our platform inspected the video and found out that it shows Mohammad al-Jasem, Commander of Sultan Suleyman Shah Brigade, making a speech during participating in Operation Olive Branch in Aleppo’s northern countryside early in 2018.

Russian-backed Assad forces have carried out a large-scale military campaign to seize control of Khan Shaykhun city in Idlib’s southern countryside and other areas in Hama’s northern countryside.