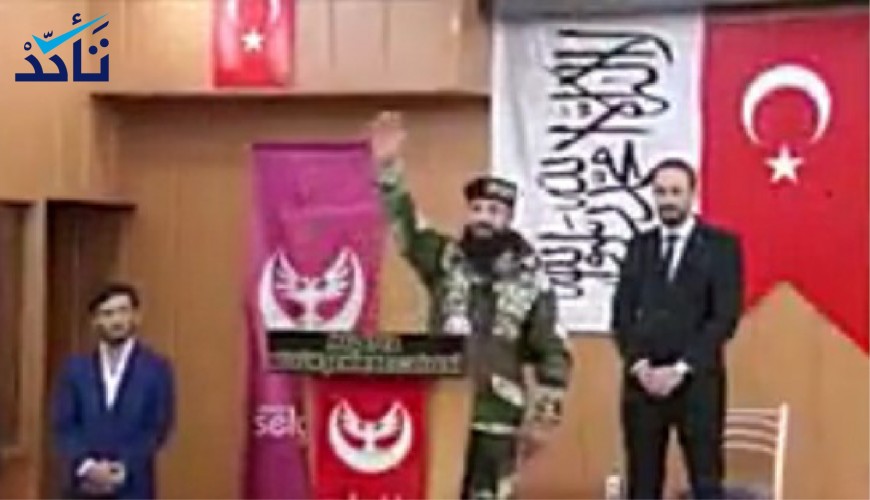 Pro-SDF Facebook pages and websites shared recently a video of a bearded man delivering a speech in front of a crowd of people and claimed he is an ISIS commander calling for Turkish people to join the Jihad against Kurds during a meeting in Turkey.

The video shows the man wearing a military camouflage and a hat written on it "No God but Allah, Mohammad is the messenger of God", while other Islamic chants are heard in the video such as "In the name of God … No God but Allah .. God is great", before the person delivered a speech to the crowd.

Afrin News Facebook page said that "the video of an ISIS commander during a meeting that was held during the past few days in several Turkish cities such as Malatya and Adiyaman in order to invite people for jihad against the Kurds in Rojava and wherever they are."

Verify-Sy searched for the source of the video and it turns out it dates back to 2016. The video is of a speech by Omar Abdullah, the commander of Sultan Abdul Hamid Division of the Syrian opposition, during his participation in an event organized by the (Seljuk Assembly in Anatolia) in Malatya, Turkey. The event was called "The Night of the Turkmen Resistance."

The event received different reactions and accusations of being affiliated with ISIS especially after the image of Ataturk in the hall was covered by "There is No God but Allah" banner. The President of the Assembly, "Ayatollah Gucan" denied in a statement published in several Turkish newspapers any link to ISIS adding that he will submit lawsuits against media outlets and individuals who accused the Assembly of being related to ISIS.

Worth to mention that Omar Abdullah is a from Syrian-Turkmen origin, was born in the village Shahroura Turkmen Mountain in Lattakia northern countryside and was the commander of "Omar Mukhtar Battalion" that participated in battles in Lattakia northern countryside between 2012 and 2013, before he became the leader of the so-called (Sultan Abdul Hamid Division), which is still based in north Lattakia.

The Syrian National Army backed by the Turkish army launched a military operation last month in north-eastern Syria, which was accompanied by a flood of fake and misleading images and videos which was debunked by Verify-Sy.

Despite the declaration of cessation of the Turkish military operations, but clashes between Syrian Democratic Forces and Syrian National Army backed by Turkey is still going on in Hasaka and Raqqa provinces.