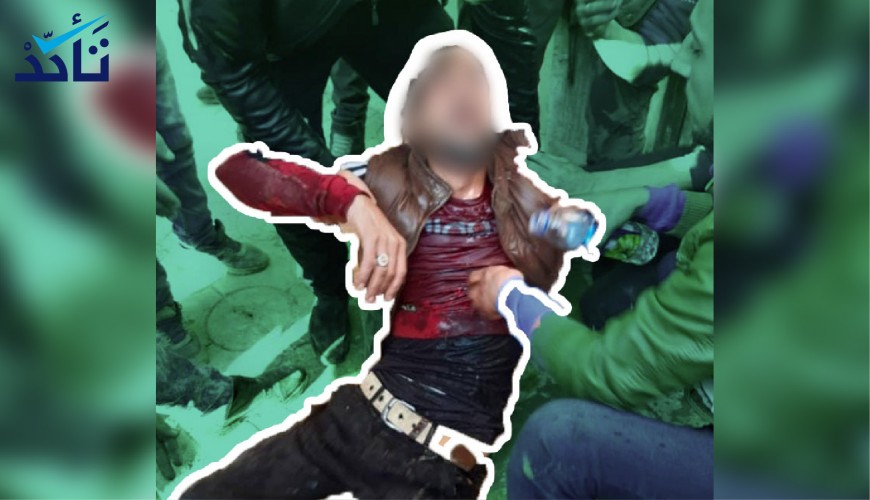 A number of social media accounts have circulated last Friday information about the death of at least one person during dispersing a demonstration by Hayat Tahrir al-Sham (HTS) in Idlib. The demonstration had gathered near the Turkey-Syria borders, protesting the aerial bombardment campaign against cities and villages of Idlib.

A Facebook account called “Abo Hamze Alsahmi” posted a photo of a man who seemed to be unconscious, and he was carried by several young men. Alshami said that the photo shows “a martyr from Ma’aret al-Nu’man” who was killed by HTS members who had used live bullets and tear gas in dispersing the crowds near the HTS-controlled Bab al-Hawa Border Crossing.

Verify-Sy Platform fact-checked the photo and identified the man appearing in it with the help of local sources. The man’s nickname is Abu Ra’d al-Homsi, and the reports of his death are not correct.

According to people close to al-Hosmi, he suffered from tear gas inhalation during the protest near Bab al-Hawa, which had been fired by HTS to disperse the protesters. He, consequently, lost consciousness for a short time.

Verify-Sy reporter denied reports that claimed there were fatalities during the demonstrations, pointing out that the injuries were limited to fainting and suffocation cases caused by tear gas that had been used by HTS to disperse the demonstration.

Hundreds of civilians protested on Friday, December 20, the international silence over the military campaign that have been carried out by the Assad regime and its allies against civilian areas in Idlib. They gathered at the square of  Bab al-Hawa Border Crossing and demanded Turkey to assume its responsibilities as one of the guarantors of the Astana process, which stipulates that Idlib Province is one of four areas included in the de-escalation zone deal.

Members of HTS dispersed the protest by firing in the air and shooting tear firing teargas canisters into the crowds, causing a number of people to faint or suffocate. HTS had arrested a number of journalists and media activists who were covering the demonstration before it released them hours later

The Assad regime and its Russian ally have attacked Idlib’s southern countryside with airstrikes and artillery shelling, causing an unprecedented displacement towards the north.