Users on social media circulated a video that they claimed shows "the President of Italy attacking Macron and accusing France of exploiting Africans and children there", but the claim is incorrect, and the woman who appears in the recording is the head of a political party in Italy.

Users on social media circulated a video that they claimed shows "the President of Italy attacking Macron and accusing France of exploiting Africans and children there", but the claim is incorrect, and the woman who appears in the recording is the head of a political party in Italy. 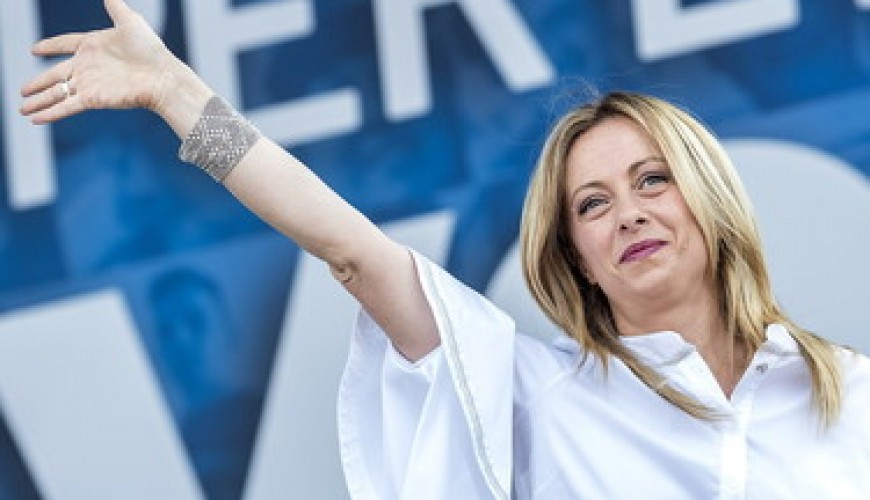 Did the President of Italy attacked Macron and accuse France of exploiting Africans and children?

A video clip was spread on social media showing a blonde woman giving a speech in Italian on a platform and in front of an audience. According to the Arabic translation, its publishers claimed that it was for "the President of Italy, addressing French President Emmanuel Macron, attacking him and accusing France of exploiting Africans and children and looting the wealth of African countries," according to the Arabic translation.

The clip received a noticeable interaction on social networking sites after it was spread on many personal accounts and public pages, a sample of which can be found in the claim's sources table at the end of the article.

Verify-Sy team conducted research to verify the claim that "the President of Italy attacked French President Emmanuel Macron and accused France of exploiting Africans and children there," and it turned out to be misleading.

Where it was found first by checking that the translation attached to the video matches the speech of the woman who was speaking Italian and that the translated clip was published by the "Italy 24" Facebook page on April 18, 2021, noting that the woman speaking in the clip is Giorgia Meloni. Which leads the Italian right-wing party Fratelli D'Italia, or "Italy Brothers".

An advanced search also found that the claim clip is part of Georgia's speech at the "ATREJU18" conference held in September 2018, an annual conference organized by the Italian right, and her speech was published on the party's YouTube channel on January 12, 2018.

Meloni's statement came in response to Macron's accusations against Italy on June 13, 2018, because it did not receive a ship carrying hundreds of refugees coming across the Mediterranean, describing its behaviour as "shameful and irresponsible."

The Italian government also announced its refusal to receive lessons from a country like France, which prefers to dismiss the immigration problem.

It should be noted that the fact-finding service of Agence France-Presse indicated that the clip belonged to an Italian parliamentarian and not to the Italian president.

Giorgia Meloni is an Italian parliamentarian and president of the Fratelli D'Italia party in Italy. The current President of Italy is Sergio Mattarella, the 12th President of the Italian Republic, who has held the presidency since February 3, 2015, and is still in office.