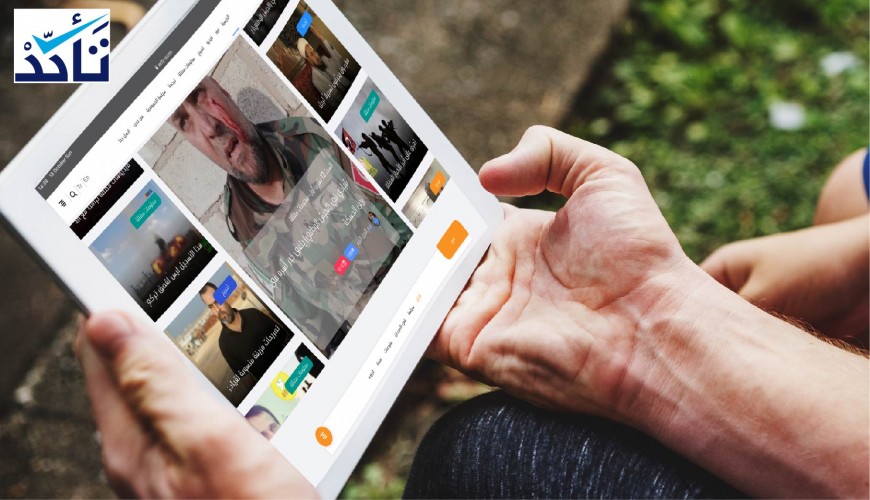 A number of fake news reports and misleading photos Friday about the Turkish military operation east of the Euphrates northeast Syria that has been launched last Wednesday.

A pro-Democratic Union Party (PYD) Facebook page, “Kubani Mubashar” (Kubani Live), has posted Friday a photo of a burning tank, claiming that it is a tank of the Turkish army that was targeted by the Syrian Democratic Forces (SDF) near the entrance of the city of Tal Abiad northern al-Raqqa.

Verify-Sy platform inspected the photo and found that it was posted on Wikipedia, where it was said to be of a Chinese-made Iraqi tank, which was destroyed by the British forces in the Second Gulf War in 1991. It was also posted on Reddit and said to be of the same war in February 1991. In addition, the Qasioun news agency posted the photo on July 31, 2019.

Verify-Sy traced back the photo and found that it was taken from a video shown on TEDx platform in 2016, in which Spanish director Alba Sotorra talks about her documentary film in Ayn al-Arab/Kubani.

A Facebook page called “Shabaket Akhbar Menbij” (Menbij News Agency) reported Friday the death of at least one U.S. soldier because of Turkish shelling on the Mesht Nour district in the city of Ayn al-Arab/Kubani. The agency attached a video to its post, claiming that the video is of the fall of bombs on the above-mentioned district.

Verify-Sy inspected the video and the news about the death of one U.S. soldier; we found that Turkish bombs hit an area near the city of Ayn al-Arab/Kubani in which U.S. Special Forces are based. The bombs, however, did not result in the death of any U.S. soldiers, according to a U.S. official to CNN.

On the other hand, tweeters have posted Saturday a video in which a number of civilians including children and women appear in a building that seem like warehouse.

Twitter account called “Umawi News” (Umayyad News) has claimed that the video shows “the National Army and the Turkish army releasing women and families of Arab tribes who were arrested by the SDF.”

Verify-Sy platform inspected the video and found that it dates back to 2018; it was taken in the village of Mrimrien of the Syrian city of Afirn.

Verify-Sy reporter confirmed that the video shows how factions of Turkish-backed National Army entered warehouses where civilians sheltered in the al-Hassan farm, which is located 3 km to the north of the village of Mrimrien, because of the battles that took place in the village during “Operation Olive Branch” that resulted in seizing control of the Afrin district by the Turkish army and its allies in March 2018.

In addition, YouTube and Facebook accounts have circulated another video, in which an armed man, surrounded by armed men, threatens Arabs; these accounts have claimed that the man is a commander at the SDF who threatened Arabs east of the Euphrates.

The man who appears in the video calls on “treating (Arabs) as Jews,” and showing Arabs no mercy. Jubar News Facebook page has posted the video with a title that reads, “Leaked Video of Commander at Kurdish Separatist Militias PKK-PYD-YPG Calling on Killing All Arabs.”

Verify-Sy platform inspected the video and found that it dates back to 2017 in Northern Iraq; the video shows a combatant of the Peshmerga of the Iraqi Kurdistan region.

Verify-Sy could not determine the exact date and place of the video. However, the fact that it has circulated in 2017 refutes any relation of the video with recently-launched Turkish military operation in Northern Syria.

Turkey announced Wednesday launching a military operation east of the Euphrates, “Operation Peace Spring.” Since then, many fake news reports, misleading photos, and misleading videos have been circulated.

Verify-Sy has clarified some of the misleading news by publishing a number of written reports and visual materials on its website and social media accounts.