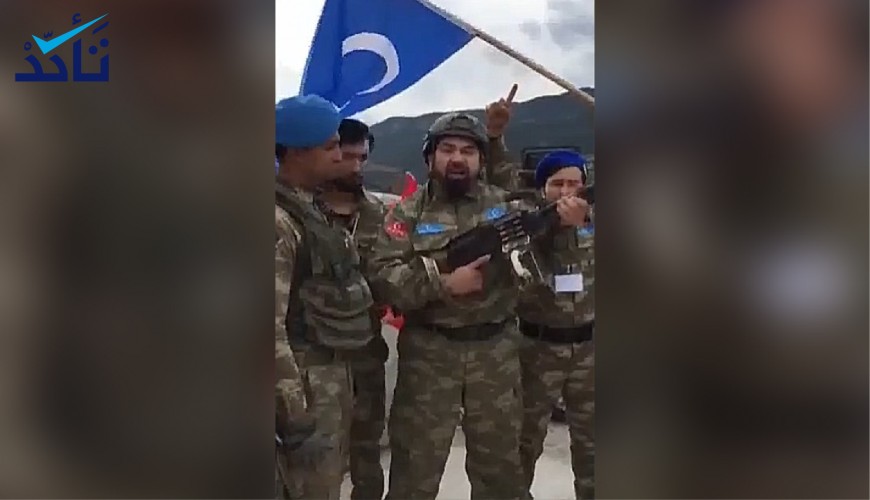 A Facebook page called “Manbij Mubashar” has posted last Sunday, November 3, a video showing armed men dressed in military uniform and carrying the flag of Turkey along with the flag of East Turkestan, in which a man is speaking Chinese.

The page has claimed that the video shows “a Chinese faction in the Turkish army declaring jihad (holy war) against the Atheist Kurdish people in Rojava.”

Verify-Sy platform inspected the video, and found that it is old footage that circulated on social media in late 2018, coinciding with Turkey’s Operation Olive Branch against factions in Syria’s Afrin. At the time, activists against the operation accused the Turkish army of recruiting Uyghur soldiers in the attack on Afrin.

Verify-Sy inspected the video and found that a YouTube channel called “Uyghur Television - 2” first published it in March 12, 2018, with a title that reads, “Chinese-Speaking Uyghur Threatens the Communist Party of China;” the video was viewed over 420,000 times. Later, the video was posted under different titles.

“It remains to be seen how China will react to this threat by forces who are directly supported by Turkey and are wearing Turkish military uniforms,” Fort Russ reported.

Human rights organizations accuse the Chinese government of persecuting the Uyghurs and subjecting them to different kinds of oppression, in addition to depriving them of their religious and social rights.