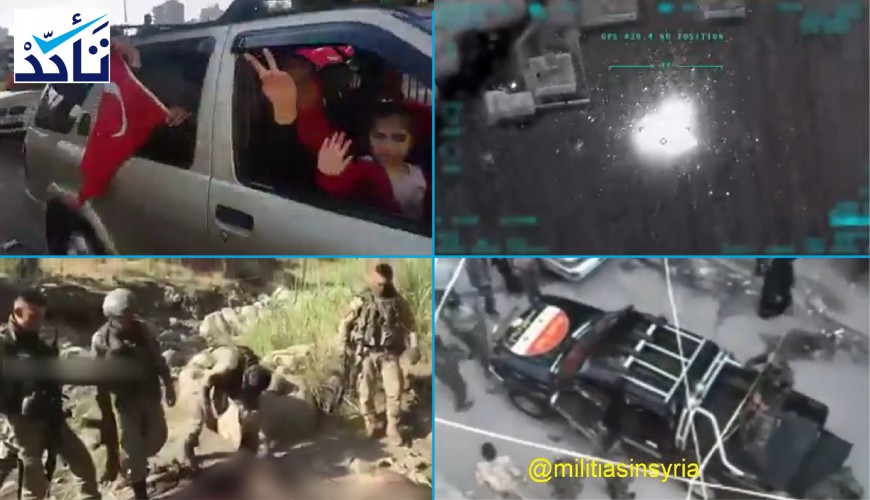 Turkey has declared on Sunday, March 1, 2020, launching a military operation against the Assad regime in northwestern Syria, after the end of Turkey’s President Recep Teyyeb Erdogan’s deadline for the Assad regime to withdraw its forces to the borders outlined in the Sochi deal.

The military operation, named “Operation Spring Shield,” was launched after the killing of 33 Turkish soldiers and injuring others in rural Idlib by the Assad regime on Feb. 27. Consequently, Turkey has bombed several positions of the regime with drones.

With the beginning of the Turkish military operation, photos and videos unrelated to the unfolding events in northern Syria have gone viral. Here are the misleading materials spotted by Verify-Sy Platform:

1- This photo isn’t of the al-Nairab Military Airport.

A number of social media news pages and accounts have circulated at dawn on Sunday a night image of smoke billowing up from a burning building in the middle of other buildings. It has been claimed that the photo shows the al-Nairab Military Airport after being bombed by a Turkish plane.

Despite the fact that Turkey has announced targeting the airport, putting it out of service, the photo is not real.

Verify-Sy Platform fact-checked the image, by conducting a reverse image search, and found that it was not taken in Syria. According to torontoist, a Canadian website, the photo shows an explosion in 2008 in the city of York in Toronto, Canada.

Another image of three parked helicopters has been circulated yesterday while plumes of fire were billowing from one of them.

A Facebook page named “Turkey Now” has claimed the photo shows “bombing the Hama Military Airport and the destroying of a number of helicopters by Turkish warplanes.”

Verify-Sy Platform, by conducting a web search using related keywords, found footage that shows the same helicopters when targeted by the Syrian armed opposition in the Taftanaz airport in rural Idlib in 2013.

The footage, posted on “Tajamou’ Shabab Mourek al-Ahrar” (Assembly of Free Men of Mourek)’s YouTube channel, is titled, “Amazing Footage of Plane Explosion in Taftanaz Airport.” The helicopters in the Taftanaz Military Airport, rural Idlib can be seen at 00:10 of the footage. They were attacked by the Ahrar al-Sham Movement opposition faction.

Footage, which was claimed to be of Lebanese protesters demonstrating in support of the Turkish military operation against the Assad regime in Syria, has been circulated on Sunday. The footage shows a number of cars and motorcycles with people raising the Turkish and Lebanese flags without any chants. Turkish music can be heard in the footage.

But the footage was not taken recently, according to the Lebanese “khabararmani” website, which posted the footage under the title, “Lebanese Raising Flag of Turkish Entity Protesting the Armenians’ Protest on April 24,” which came in response to burning the flag of Turkey during a protest in Beirut in the anniversary of the Armenian Genocide.

According to the website, the footage shows “a car protest organized by the Kurdish National Loyalty Party in the Saleem Salam area, which headed to the al-Tariq al-Jadida area, reaching Burj Abi Haidar in the Lebanese capital, under the protection of the Lebanese security forces.”

4- This footage doesn’t  show a Turkish warplane targeting the funeral of an official of the Assad regime.

Also, another footage that shows an explosion in a gathering of armed people who seems to be mourning a dead has been circulated on social media. Women’s Zagaried, a traditional cry to mourn martyrs, can be heard as well as a man delivering a speech about “martyrs,” then another group of armed men pass through carrying a coffin covered by the flag of the Assad regime. Then, an explosion occurs that forces the cameraman to stop filming amid cries of panic.

It has been claimed that the footage shows the funeral of an official of the Assad regime who was recently targeted by a Turkish drone during Turkey’s “Operation Spring Shield.”

5- This footage doesn’t show Turkish soldiers beheading a member of the Assad forces.

Footage of men dressed in military uniform next to dead bodies of armed men, while one of them can be seen carrying a severed head, has been circulated on social media.

Syrian journalist Eida al-Basha, a field reporter at the pro-Assad channel al-Mayadeen, has shared the video on his Twitter account. He has claimed the armed men, who can be seen mutilating the dead bodies, are Turkish soldiers and that the dead ones are members of the Assad regime.

Verify-Sy Platform found the video published on a number of Arabic-language and English-language news websites in 2018; at the time, itt was reported that it shows a Turkish soldier carrying the head of a combatant of the Kurdistan Workers' Party. Our team could not verify these reports, but the fact that it had been circulated two years ago refutes the claim that they the dead were of Assad’s forces. Of note, there has never been any direct confrontation between the Turkish forces and Assad’s forces before Turkey’s latest military operation.