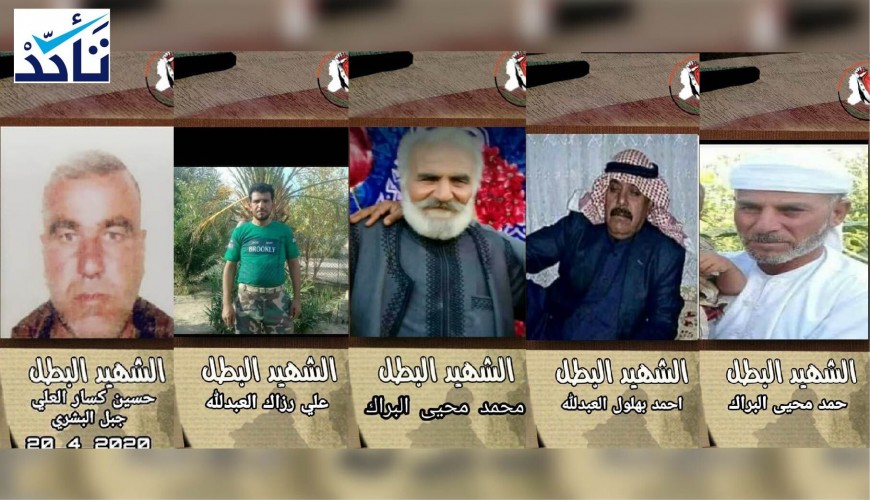 These Dead Men were Militiamen of Pro-Assad “National Defense”

Syrian news websites and social media pages reported Monday, April 20, that five men from the al-Traief village of Deir al-Zour in eastern Syria were shot dead during searching for truffles near Mount Bishri.

Were they civilians or armed?

Several news websites and networks that cover the situation in eastern Syria said the dead men had originated in the al-Traief village of Deir al-Zour, and had been killed during searching for truffles near Mount Bishri which suggests they were civilians.

In a news report titled “Five Men Executed in Attack by Armed Men in Raqqa,” Orient News, citing information published by “Raqqa is Being Slaughtered Silently,” reported that “an armed group have executed five people and kidnapped one other while they were searching for truffles near the administrative borders between the governorates of Raqqa and Deir Ezzor.” It also said the dead men had originated in the al-Traief village, located near Mount Bishri, in the Syrian province of Deir al-Zour.

Also, Verify-Sy Platform found that the dead men were mourned by the pro-Assad National Defence Forces militia, which claimed the men were in its ranks.

A Facebook page named “National Defense - Deir al-Zour Center” mourned the men, claiming they had been killed in clashes with ISIS near Mount Bishri on April 20.

The page posted photos of the men in which one of them appears wearing army trousers.

After being unable to obtain accurate information related to the incident, Verify-Sy Platform called on its audience, especially the ones from eastern Syria, to help fact-checking the above-mentioned claims by providing any relevant information. Consequently, Verify-Sy had received information about the incident and fact-checked them with the help of Syrian journalist Mohammad Hassan who focuses on eastern Syria.

It was found that two of the killed men, Ahmad al-Bahloul al-Abdullah and Ahmad ebrahim al-Bahloul, were ex-opposition combatants who had engaged in the so-called “reconciliations” led by the Assad regime during the past two years in areas it had recaptured from the opposition.

Hassan said the five militiamen were conducting a “military operation” in the Mount Bishri district when they were shot dead by unidentified people - most likely members of ISIS.