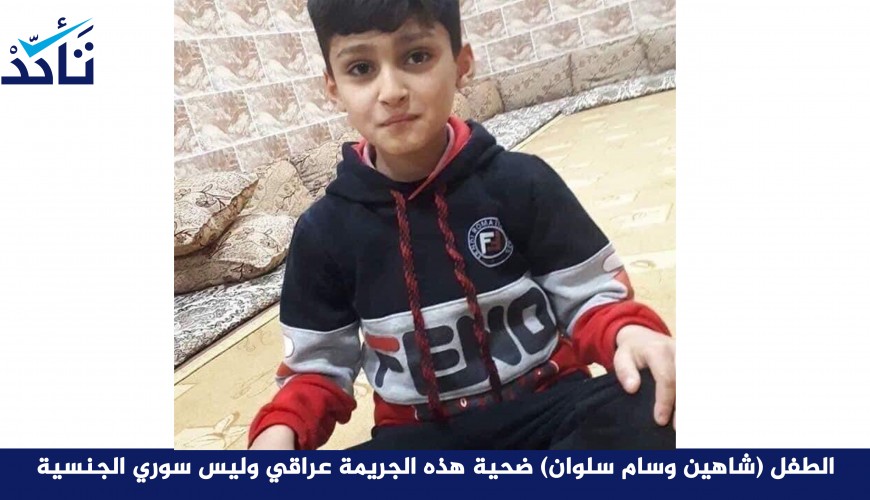 The Eight-year-old Murdered Child in Mosul was Iraqi, not Syrian

News that a Syrian child was brutally murdered at a refugee camp in Iraq has been circulating on social media.

A Facebook page named “Page and Assembly of Syrian Refugees in Lebanon” has claimed that Shaheen Weesam Salwan was a Syrian child who was kidnapped from a refugee camp and found murdered the next day. It has posted two photos of a boy, one of them shows the dead body under two large stones. The post has over 250 reactions, around 100 comments, and 16 shares at the time of writing.

A Facebook user named Dalila Swaikbi has also posted the photos on a cooking group. Her post has more than 1700 reactions and nearly 700 comments.

The Iraqi was killed in Mosul

A reverse image search by Verify-Sy found that the incident had occurred in the Zmar area, northeast Mosul, Iraq. However, the murder child, Shaheen Weesam Salwan, was Iraqi, not Syrian.

Verify-Sy reached out to Iraqi journalist Nasser al-Ojaili who reported on the incident for Al-Arabiya. Al-Ojaili confirmed the child was Iraqi.

The husband of the victim’s grandmother, Mohammad Jasem al-Abdullah, said the child went to a nearby shop before he went missing, Al-Arabiya reported. The child, according to al-Abdullah, lived with his father after his parents broke up when he was 1-year-old. He also said the child’s father is an Iraqi police officer.

Ahmad Ja’far, Mayor of the Zummar district of Nineveh Governorate, announced Saturday May 2 that a group suspected of committing the murder was arrested. “An investigation committee was formed on the backdrop of killing the child in Mosul, and suspects were arrested,” the mayor said in a TV interview with Al-Ahd TV.