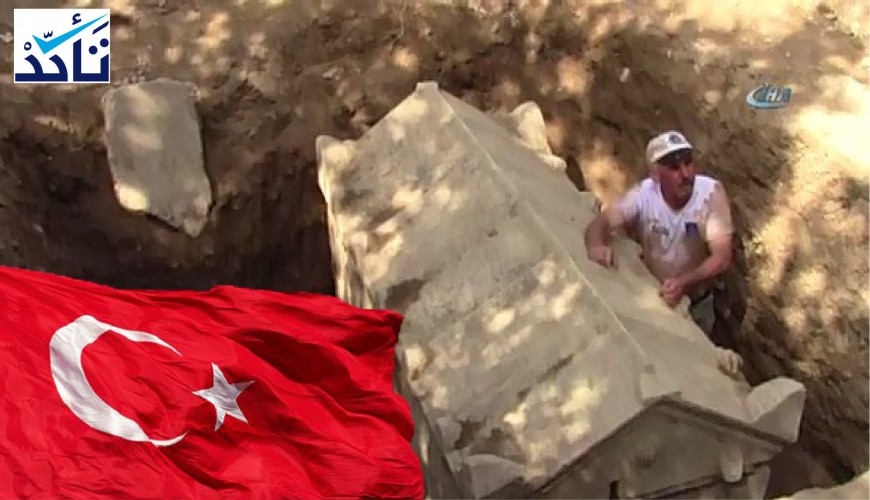 Social media accounts recently shared a video recording showing men taking out what appears to be a large sarcophagus buried under the ground, claiming that it was the looting of an ancient cemetery in Efrin city in Aleppo northern countryside, by Turkey. But this video was recorded in Turkey and not in Efrin, Syria.

Social media accounts posted a video, showing a heavy machinery surrounded by men, lifting a large sarcophagus from underground. These accounts claimed that the video shows how Turkey is looting an ancient cemetery in the city of Efrin. The video was posted on Twitter by an account named (PYD_Rojava), on August 2, 2020, with an attached comment saying: “Watch how the Syrians and Turkish gangs extracted a complete archaeological tomb and stole it in Afrin..Turkey destroys civilization!,” and the video gained more than 10,000 views and was  retweeted hundreds of times. As the video was posted by other accounts on Twitter, it also claimed that Turkey and Turkish-backed SNA factions were looting an ancient cemetery in Efrin.

Verify-Sy team searched for the source of this video and it turns out the claim is misleading. It became clear after the search for the source of the video, that the discovery of the cemetery is not new, but occurred in 2016 in the Turkish province of Bursa. On September 10, 2016, the Turkish news agency (IHA) published a video recording of the archaeological site itself, during the process of extracting the sarcophagus that appeared in the circulated video. The video published by the agency was filmed from a different angle from the video that was said to be in Efrin. The same sarcophagus appears in the two videos, with the man wearing a purple shirt, and the name of the municipality of Bursa appears on the shirts of the workers during the artifact extraction.

The Turkish Agency stated that the archaeological site in which the cemetery was discovered is a historical city called (Iznik) in the Turkish Province of Bursa.

- The video circulated by pro-PYD accounts does not prove the looting of an ancient cemetery in the city of Efrin in north Aleppo.

- The archaeological cemetery was discovered years ago, and extracting the sarcophagus shown in the video took place in 2016 in the historical city of Iznik in the Turkish province of Bursa.