Recently, news websites, news pages, and personal accounts circulated a story about a Syrian girl achieving a global achievement in the "International Mental Arithmetic Contest." However, the Syrian girl proved her superiority in this field, the competition was conducted by an unknown and profitable Chinese company, and the grand prize was given to 286 participants.

Recently, news websites, news pages, and personal accounts circulated a story about a Syrian girl achieving a global achievement in the "International Mental Arithmetic Contest." However, the Syrian girl proved her superiority in this field, the competition was conducted by an unknown and profitable Chinese company, and the grand prize was given to 286 participants. 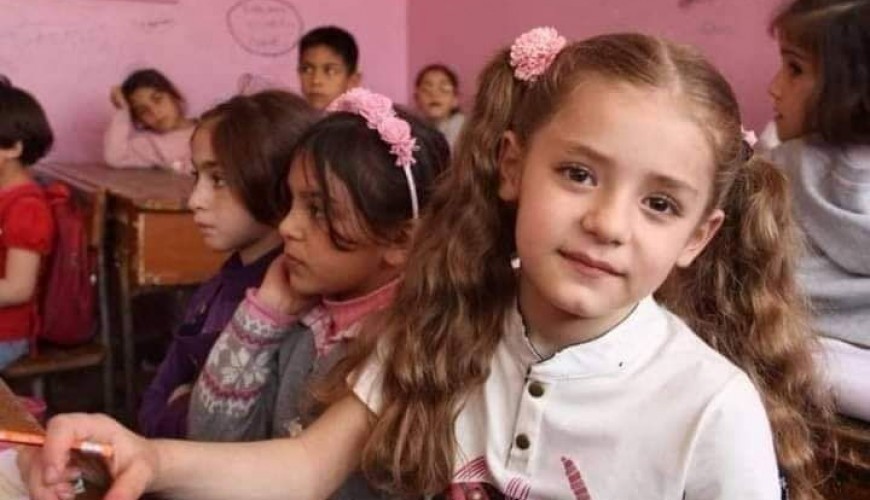 What is the reality of the "International" competition in which the Syrian "Sarah Kayali" won its "Grand Prize."

Recently, websites, news pages and personal accounts circulated news about a Syrian girl winning a "global prize" in mental arithmetic operations, in an "online" competition organized by a Chinese organization, with the participation of more than six thousand students from several countries, including the United States, Britain, Australia and other countries. Arab and foreign.

In the list of sources below, you will find a sample of the sources that circulated the news, which has spread widely on social media over the past two days.

Verify-Sy platform congratulates the Syrian girl (Sarah Kayali) this well-deserved welcome on social media regarding our monitoring of videos confirming (Al Kayyali) abilities in mental arithmetic. However, inquiries were received by Verify-Sy platform regarding the award itself, the organizer and its importance. In respect of these inquiries, we conducted the following investigation according to the verification methodology adopted on the platform.

Steps we followed in preparing our report

The beginning was from the search engine (Google), which we resorted to in search of specific keywords (Mental Arithmetic Contest, Brainy Kids, ACIDA) and other words extracted from the news circulated in the context of the topic, using the advanced search mechanism provided by (Google), and we couldn't find any result that shows additional information other than that reported by the sites mentioned in the list of sources below, as we did not find a trace of the organizing company nor the award itself in any content broadcast from reputable media in any of the countries from which students were said to have participated in the competition.


In support of the previous result, within the framework of our extensive research, we involved people residing in some countries who are fluent in their language; from countries were said that students participated in the competition, such as (Britain, USA, China).


The participants in the research conducted the local media and social networking sites, and the result was unanimous that there was no result of this competition, especially in the Chinese media.

Using the same keywords, the Verify-Sy platform team searched on Facebook. Many results appeared that were published during the past few days on pages belonging to companies and educational organizations concerned with developing mental arithmetic skills in children, most of which were based in Lebanon, including a page named (Brainy Academy - Brainy Kids), which defines itself as specialized in "Human Development, Life Skills, Mental Arithmetic System, Robotics, Mental Health, and other educational programs for adults, teens and children".

The page mentioned above allows the ability to communicate with its organizers via the WhatsApp chat application, and a number with the key to the state of Lebanon was contacted, who identified himself as Mr. “Mohamed Sweed,” the representative of ACIDA, the competition’s organizer in Lebanon, and the director of the Lebanese company Brainy Kids.

Mr Sweed's statement summarises that the organizing company is Abacus Culture International Development Association Limited, which identifies itself as ACIDA, and runs by the Chinese (Ma Yank Ping). It's a for-profit company licensed in Hong Kong.

Hong Kong is considered one of the best places to set up a company due to the favourable conditions. According to the Index of Economic Freedom, it enjoys a favourable tax system and other advantages that make its economy the freest economy.

We looked at the sites that provide company incorporation services in Hong Kong, and it turned out that five types of companies can be registered there, one of which is a limited joint-stock company, such as ACIDA. Those who want such a license have to submit documents such as the incorporation form and the identity of the founders, paying a small fee and later opening a bank account.

Depending on one of the open data sites for companies, there is a license for the company mentioned above, which updates data related to Hong Kong-based on a government site specialized in licensed companies in Hong Kong. It is clear that ACIDA was registered about three years ago, and there is only one activity, which is the establishment of the company.

We checked the Facebook account of the Chinese director of the company (Ma Yan bing). There is nothing to suggest that his new company has organizational experience in activities related to mental arithmetic. We sent him to inquire about the nature of his company's activity, the competition, advertising mechanisms, registration and arbitration, but he didn't respond so far.

Participation in the competition is paid:

It is noteworthy that the competition mentioned above requires the participants to pay an amount of 23 US dollars for each participant, according to the statement of the representative of the Chinese company in Lebanon (Mohamed Sweed), and the transfer to a bank in China not in Hong Kong, where the license is located, and below are the bank account details that we obtained from a post in the Chinese company's Facebook account. 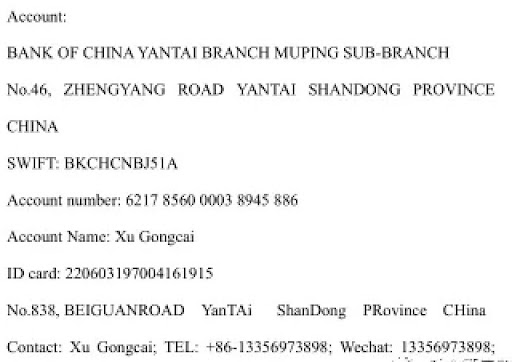 Based on the statements of the representative of the Chinese company in Lebanon, we conclude that the total amounts collected from the participants' fees in the competition amounted to 140,622 dollars, given that the number of participants amounted to 6,114 participants. In return, the company awards its prizes as electronic / paper certificates and nothing more, with special discounts for fees Training in the approved centers that represent the Chinese company, as indicated by (Sweed).

Is there really only one winner in the first place, and is the grand prize given to him alone?

We asked this question to the representative of the Chinese company in Lebanon, Mr. (Mohamed Sweid). He replied: "268 participants won the grand prize, and he provided us with a picture of a sample of the grand prize winners, and it turned out that the Syrian Sarah Kayali ranked 23, in addition to that the first four places were distributed to 1500 participants out of 6114.

In response to Verify-Sy platform’s question for the representative of the organizing body in Lebanon regarding the bodies supervising the competition, he said that supervision is only by the Chinese company, which includes cadres of educators specialized in the field of mental arithmetic, according to him, denying the existence of an official international federation specialized in supervising or organizing such Such competitions.

We expanded our search for mental arithmetic competitions using the search engine (Google). We got several related results, most notably what was published on the digital encyclopedia (Wikipedia) about the (Mental Calculation World Cup), which the encyclopedia says is an "international competition for mental calculators, held every two years in Germany."

According to the same encyclopedia -in which every piece of information is based on a clear reference- the first version of the competition was held in Germany on October 30, 2004, while the current year's version, which was "planned to be held from August 21 to 23, 2020 in Heinz Nixdorf Museums Forum (the largest computer museum in the world) in Paderborn, Germany, due to the Corona pandemic and postponed until an unknown time.

It is noteworthy that the World Cup mental arithmetic competition, which is held in Germany, which is a well-known competition among the circles of those interested in this regard, a limited number of participants participate, such as the 2004 edition, where 17 people from 10 countries participated, which also brings us back to the question about the Chinese company's keenness to The involvement of the largest possible number of participants without resorting, for example, to qualifiers among themselves, and giving the grand prize and the four places to thousands of participants, in what appears to be an attempt to appease.

During our communication with Mr. (Mohamed Suwaid), we informed him of this result, but he responded that this competition - meaning the World Cup for Mental Arithmetic - does not depend on the abacus only, but rather depends on all the methods that students learn with mental arithmetic, while their competition Specialized for students who rely on the mental arithmetic pattern using the abacus, pointing out that one of their students named (Mohammed Al-Mir) participated in one of the courses of the international competition and won first place, but the Verify-Sy platform was unable to verify the validity of this because the name of the student was not mentioned in the list of winners of the first ranks during the previous versions of the competition on (Wikipedia).

After we published our report on our website and platforms yesterday, Saturday evening, Mr. (Mohamed Sweed), director of the Lebanese company "Brainy Kids", and the representative of the Chinese company (ACIDA) in Lebanon, contacted us today, Sunday, December 13, and sent a clarification, which we publish as stated without any modification or Feedback:


"I've read your article on your page, and I have no objection to any of the mentioned information, except for the amount obtained by ACIDA, as I explained to you that the subscription amounted to 23 US dollars, which is a correct number, but it includes besides the subscription fee the bank transfer fees and more than 50 hours of training."