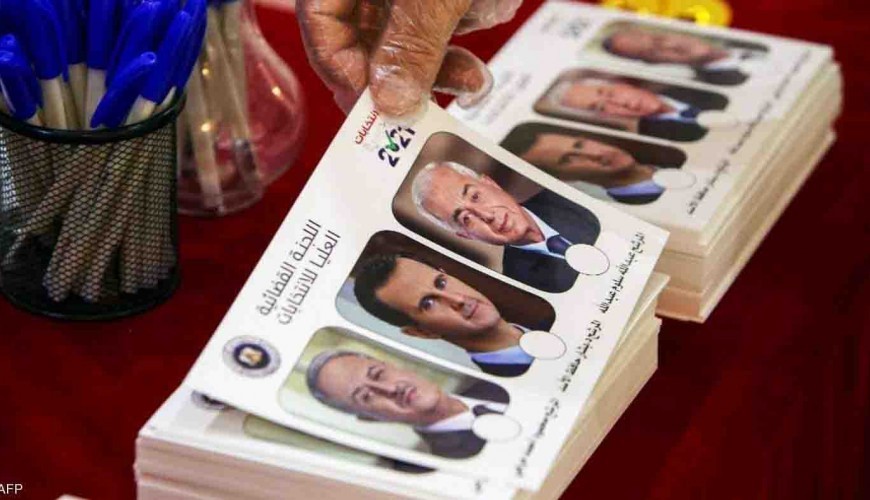 The head of the "People's Assembly" in Syria, Hamouda Sabbagh, announced the victory of Bashar al-Assad for a fourth presidential term, after announcing that he had obtained 95.1% of the votes participating in the "Syrian presidential elections".

In a press conference held Thursday evening, May 27, Sabbagh claimed that Bashar al-Assad obtained 13 million and more than 540 thousand votes out of 14 million, 239,140 voters who participated in the elections. Sabbagh also claimed that the number of voters who are entitled to vote inside and outside Syria is 18 million and 107 thousand and 109 voters, so that the percentage of participation in the elections, according to his claim, has reached 78.64%.

The other two candidates, Abdullah Salloum Abdullah and Mahmoud Mer’i, received 1.5 percent and 3.3 percent of the vote, respectively, according to figures announced by Sabbagh.

In this investigation, we review part of the misinformation and fraud cases monitored by Verify-Sy platform during its follow-up to what was published about the Syrian “presidential elections”, which Syrians described as a “farce”, dealing with each allegation with its source and refuting it based on clear and explicit references and documented testimonies of citizens who were forced to participate in it, and the platform reserves the right not to mention their names for their own safety.

Participants in the presidential elections

Starting with the numbers of the participants and those who are entitled to participate in the elections, where it was remarkable the big difference between the numbers that People’s Assembly Speaker Hamouda Sabbagh claimed to have participated in the elections and the numbers mentioned in a report prepared by the Jusoor Center for Studies in cooperation with the “Informagen platform for data collection and analysis.” In the presidential elections in Syria, according to the official division of administrative units on the basis of the 270 districts.

In its report, which was published on May 27, Jusoor Center attached an interactive map showing the number of eligible voters over the age of 18 in regime-controlled areas, about 6 million, in the districts that participated in the elections, and approximately 1,150,000 in each districts that boycotted it, and these numbers express the highest number of participation or non-participation among those entitled to vote, as the population study prepared by the Informagen platform showed that those who have completed 18 years are about 66% of the total population.

The report indicated that by interaction it means the possibility of participating in the elections or not in the areas that contain ballot boxes, or the boycott in the areas where there are or not ballot boxes.

In its report, based on a previous study issued with cooperation with the “Information platform for data collection and analysis” on March 25, 2021 on the population change, which clarifies the distribution of the population inside and outside Syria and in areas controlled by the Syrian regime, the Syrian opposition and the Syrian Democratic Forces. There are about 16.5 million people inside Syria, of whom about 9.4 million are in the areas controlled by the Syrian regime, and 7.075 million are in the areas outside its control.

These numbers and statistics belie the validity of the data that the Assad regime spoke about, last Thursday, after the speaker of his parliament, Hamouda al-Sabbagh, announced that Bashar al-Assad had won a fourth presidential term.

Pro-regime media portrayed Syrians parading by the thousands to participate in the presidential elections to support Bashar al-Assad. However, this investigation proves that what has been circulated is misleading.

On May 26, the University of Damascus published, on its Facebook page, pictures claiming that thousands of students from the Faculty of Arts participating in the presidential elections. However, the attached document and the testimonies we obtained from university students prove that the Syrian regime forced the students to Sharing.

The university took advantage of the students by setting the election day as an exam day in most colleges, in order to ensure their attendance, forcing them to vote and portraying the event as a “heavy turnout for electoral participation.” Verify-Sy obtained a document proving that the ruling Baath Party directed the deans of colleges to conduct exams for students on election day, in order to force them to elect al-Assad.

From the west of the Euphrates to the east: Verify-Sy organized training workshops in fact-checking

Does this video show Assad heading to his work at the presidential palace in the morning of the triple strike?

The document states in the fifth item of it: “To discuss with the comrades’ deans of faculties and directors of institutes the possibility of obligating students to work on the day of the presidential election on 26/5/2021 and to exercise their electoral right through methods such as (announcing oral notes during lessons or written tests). Putting lists with the names of students in each college and institute on the bulletin board, and indicating that these names listed have the right to exercise the right to vote, and that the university has several geo/graphically distributed boxes in which they can cast their votes, placing practical lectures in which the student’s attendance is obligatory and they are not usually allowed absence from its sessions in colleges whose weekly schedules include theoretical lectures only on the due day, and urging fellow teachers to accompany their students to the university’s polling stations to exercise their right to vote together.

Khaled Al-Omar, who is a pseudonym for a student at Electric and Mechanic Faculty, said, "The Dean of set practical exams for the students on election day, and forced them to elect Assad."

Among the means of coercion, according to the same student: on the morning of the elections, the security forces gathered students living in the university dormitory in Damascus, to force them to participate in the presidential elections.

"We were awakened since five in the morning and the students were gathered in the university dormitory" said Fatima al-Khalidi, who is a student at the Faculty of Arts in Damascus. She added, "An inspection of the rooms was carried out to ensure that no resident failed to participate in the elections."

She stated, "After that, everyone was transferred to the Faculty of Arts, where there were cameras from the regime's media that filmed the students participating in the elections."

It was not only the students who were forced to participate in the elections in favor of Assad, but the regime deliberately put pressure on state employees and prevented them from being absent on election day.

Where the electoral centers in the institutions of the Syrian regime, which opened their doors early last Wednesday morning, witnessed pro-Assad celebrations, amid pressure on employees to elect him from among the other candidates.

"The accountant in her ministry forced all the ministry's employees to elect al-Assad, and also prevented us from entering the voting room," said Samar Sharbaji, who is an employee of the Ministry of Internal Trade in Damascus.

Activists also circulated a leaked video showing an employee at a polling station taking people's IDs and voting for them, limiting their role to placing the envelope in the box.

Likewise, there were those who used to come up with IDs for people and elect Bashar al-Assad, as happened in an electoral center in the Mezzeh area of ​​Damascus, according to the testimony of a source to Verify-Sy, and this violates the General Elections Law in its third article, which says, “This right may not be exercised by proxy,” but for the regime, these laws are only on paper.

While the residents of Harasta refrained from leaving their homes on Wednesday morning, unless absolutely necessary, so the Harasta municipality, in cooperation with the Harasta Association, collected family cards and IDs for the people of the city under the pretext of distributing aid basket to them.

But they were surprised when their IDs were taken and forced to fill out the electoral paper and asked to put it in the box in person, and then take them on buses to all the electoral centers in Harasta to vote in it several times in favor of Assad, without getting that basket.

Assad's army is elected by blood and commit fraud

Activists also circulated a video showing a member of the Syrian regime army casting his vote on dozens of papers with blood, which is a legal violation.

A lawyer residing in Damascus said, "The participation of the military in the elections is a constitutional violation, as it violates the principle of democracy, freedom of expression and election, and the right of the people to choose their representatives fairly and freely."

He mentioned that, as long as the president - according to the constitution in Article (105) - is the commander-in-chief of the army and armed forces, he remains in control of the military and exercises his influence and authority over them.

He added that the General Elections Law "ban the right to vote and to run for membership in the People's Assembly or membership of local administration councils from the military and the internal security forces while they were in service," but left the matter without mentioning the presidential elections.

This means legally that they can be allowed in the presidential elections, since the law did not explicitly prohibit them, but this remains in violation of the constitution.

The state of the “elections” in the industrial and economic capital of Syria was no better than it seemed in the political capital, as the Verify-Sy platform monitored numerous violations during which the city’s residents and students at its university were forced to elect Bashar al-Assad.

An employee in one of Aleppo’s pharmaceutical factories told Verify-Sy platform that Syrian intelligence agents entered the company’s headquarters on the day of the elections and collected the IDs of all workers for the purpose of voting on their behalf, before they returned it to them at the end of the day.

The platform’s correspondent in Aleppo quoted students at the Faculty of Civil Engineering at the University of Aleppo confirming that the Dean of the faculty forced them to participate in the elections, and took out personal documents from his college records for students who tried to evade participation on the pretext that they did not carry their personal documents, and a number of teachers at the university said that the intelligence threatened to hold non-participants accountable and refer them to investigation.

The Syrian regime announced that voting in the Syrian presidential elections for those outside the country will be available only to Syrians who have an "official exit stamp" on their passport, and have a "valid passport."

The general election law states that "the voter must vote with his regular, valid Syrian passport, which is stamped with an exit stamp from any Syrian border crossing."

News spread on social networking sites about the participation of non-Syrians in the elections that the regime held in a number of its embassies, amid a boycott by most countries of the world, and the lack of recognition of its legitimacy. Activists circulated a video clip in Australia showing Lebanese, Iraqi and Palestinian people inside the regime's consulate in Sydney electing Bashar al-Assad. According to the video, it is noticed that a person ran away before voting, which prompted the election committee in the consulate to vote in his place in absentia, after they obtained his information and official papers.