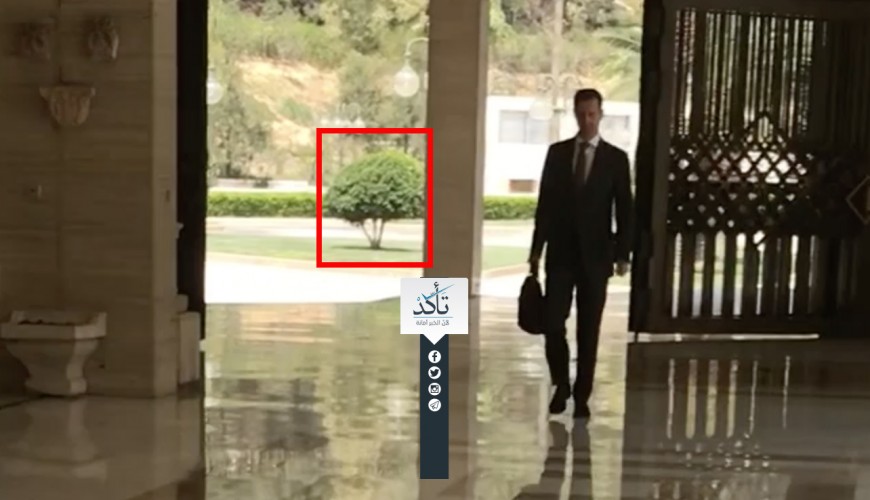 Does this video show Assad heading to his work at the presidential palace in the morning of the triple strike?

Presidency of the Syrian Arab Republic shared via its identifiers on social media websites this morning, a video recording of 9 seconds, showing Bashar al-Assad during his entering the presidential palace walking and holding a briefcase without saying anything to the camera.

The "Presidency" attached the video recording, which was posted at 08:58 on Saturday morning, with the words "morning of steadfastness," while many of the Syrian, Arab and foreign news channels said that the recording filming the moment of the "Assad" entering the presidential palace this morning to do his work normally.

During a revision conducted by Verify-Sy platform to the mentioned recording, turned out that through the reflection of the sun shadow on the trees that appeared behind the Assad in the palace garden, that the video was recorded in the afternoon, confirming that the recording was not filmed this morning.

Observers can review the recording and observe the reflection of the sun's shadow on the trees appearing in the palace garden in the first four seconds, where it seems clear that the sun's shadow reflected on the garden floor vertically means that the sun is in the middle of the sky and that the picture is recorded in the afternoon and not this morning.

It should be noted that the posting of the recording came a few hours after air and missile strikes targeting several military sites of the Assad regime in Syria by the United States of America, Britain, and France in response to the use of chemical weapons by the regime in Douma city last week.