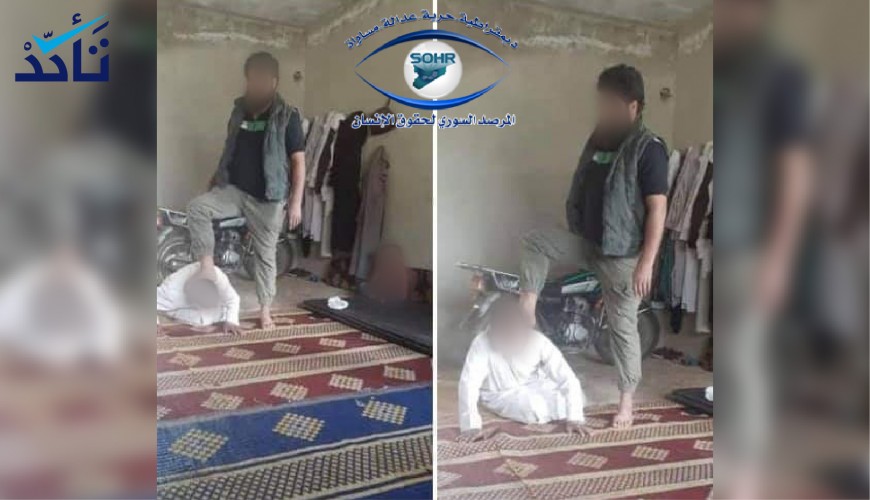 The Syrian Observatory for Human Rights (SOHR) has claimed Friday, May 15, that “radical militiamen” had beaten and humiliated a Muzaaen, or prayer caller, in Jisr al-Shugour, Idlib because he had “committed Bidah,” which literally means to create a new thing without precedence and in this context is to create an unprecedented practice in Islam.

The SOHR has claimed that the Muazzen had been accused of performing Tasmee before the dawn prayer. Tasmee is the recitation of emotional poetry right before Azan, the Islamic call to prayer.

Photos of the humiliation reported by the SOHR have been circulated on social media and instant messaging apps.

The Corrections of SOHR’s false claims:

- The man was humiliated by a civilian, not by a militiaman.

- The reason behind the assault was settling a score, not Tasmee.

- The victim hasn’t been working as a Muazzen for the past ten months.

According to sources and eyewitnesses from the al-Bal’a village of Idlib, Ghazwan S., the victim of humiliation, worked as a Muazzen in the village of Jisr al-Shughour for five years. In August 2019, Dahham D., another Muazzen, took his position after problems were on the increase between Ghazwan and the residents of the village.

Ghazwan then moved to the al-Ghafar village, which is situated 3 kilometers from the old one. He worked as an Arabic teacher for elementary school students, whereas Ahmad B. holds the position of the Muazzen in the new village.

According to residents of the two villages, ten notables of the two villages headed to Ghazwan’s new home on Monday May 11 to confront him with evidence and documents related to the conflict between him and residents of al-Bal’a. On the same day, Abdulrahman S. insulted and humiliated Ghazwan while another person captured footage of the incident and posted it on a WhatsApp group and social media.

Eyewitnesses confirmed that Hayat Tahrir al-Sham (HTS)’s security forces had arrested the assaulter on Friday evening, May 15, after photos of the incident went viral on social media.

Abdulrahman, the assaulter, hasn't been a member of any armed group since he left HTS around four years ago, multiple sources told Verify-Sy. He runs a business of currency exchange and selling mobile phones in the al-Bal’a village.

Disclaimer: Verify-Sy hasn’t narrated the details of the conflict between the victim of humiliation and the residents of al-Bal’a village to protect the privacy of both sides.