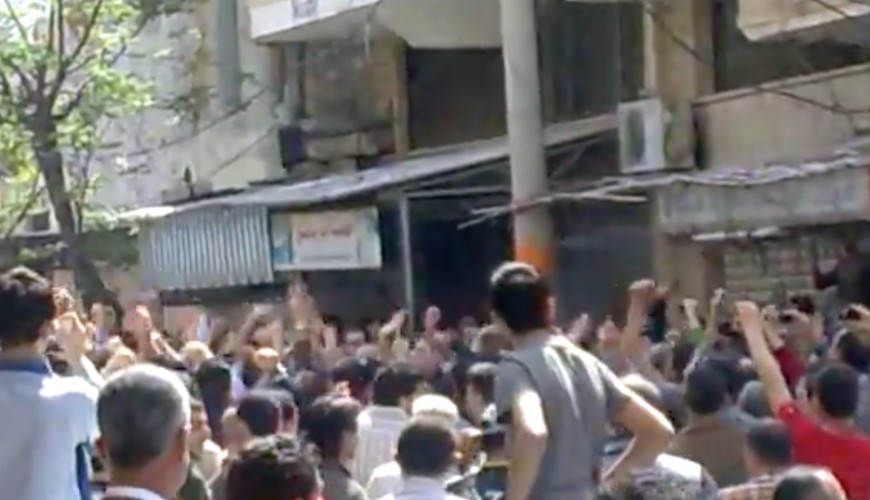 Has an anti-Assad Protest Erupted in Syria’s Jaramana Recently?

Qasioun News Agency falsely claimed video footage shows an anti-Assad protest had erupted in the district of Jaramana, Rif Dimashq Governorate. In fact, the footage shows a demonstration in the coastal city of Tartus in April 2011.

The Syrian Press Center falsely claimed a protest had erupted in Jaramana.

Video footage of big crowds protesting against the Assad regime has been circulated on social media.

Qasioun News Agency posted the footage on its Facebook page claiming that it shows a protest that had erupted in the al-Nahda neighborhood of Jaramana, Rif Dimashq Governorate, without providing additional information on the specific date of the protest. The post had gone viral with over 3500 interactions and 170 shares, then it was deleted without providing any clarification.

Besides, the Syrian Press Center (SPC) has claimed on Facebook that people took to the streets in the al-Nahda neighborhood of Jaramana. The post has over 2,000 interactions.

A reverse search by Verify-Sy Platform, conducted to fact-check the footage, found that the video had been posted on YouTube on April 8, 2011, under the title, “Demonstration in Tartus after Friday Prayer.” The Friday was named “Friday of Steadfastness” by pro-Revolution activists.

No recent demonstrations in Jaramana

Local sources in the district of Jaramana, Rif Dimashq Governorate told Verify-Sy the news about alleged protests in the area are completely unfounded.

More Of Protests in Syria