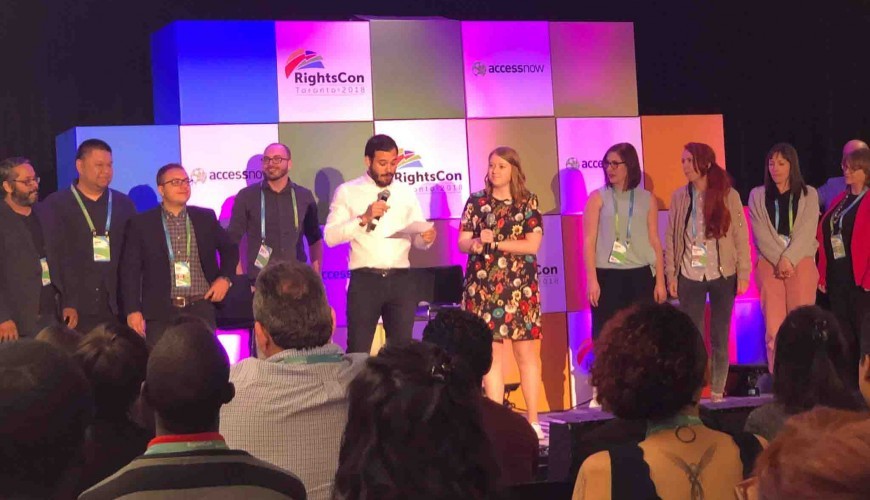 RightsCon kicks off with the participation of Verify-Sy

Verify-Sy is participating in the 10th conference of RightsCon, which is being held digitally due to the COVID19 travel restrictions. With the participation of more than a thousand speakers from civil society activists, business leaders, policy makers, technologists, legal advocates, journalists, developers and content creators from all over the world to promote results at the intersection of human rights and technology.

As the activities of the first day of the conference, which is considered the largest global event in the field of human rights in the digital age, will officially start on Monday, June 7, and will continue for five days until the eleventh of this month, during which Verify-Sy will discuss in its session along with representatives of Arab platforms working in the same field, the important role played by fact-checking platforms in conflict areas in the Middle East and North Africa.

The session will be held at 9:15 am on Wednesday, June 9, under the title “The Role of Fact-checking Platforms in Reducing Hate Speech and Online Violence in Conflict Zones.” The session link can be accessed by clicking here.

Verify-Sy platform will be joined in the session by colleagues from the Palestinian Observatory for Verification and Professional Control (Kashif) from Palestine, colleagues from the Technology for Peace Project from Iraq, and the journalist specializing in information verification Mahmoud Ghazil from Lebanon.

Speakers in this session focus on the role of fact-checking platforms in reducing hate speech and online violence in conflict areas in Middle East and North Africa region, and explain during their session the role of the platforms in reducing hate speech and violence online, and the challenges that the platforms encounter them during their work on this, by recounting their experiences and presenting examples of topics they addressed in this context.

It is noteworthy that Verify-Sy platform's first participation in the conference was in 2018, during its seventh session, which was held in the Canadian city of Toronto, during which its team presented a session on the role of misinformation and false news in fueling conflicts.

The following year, the platform participated in the eighth session of the conference hosted by the Tunisian capital, Tunis, and its representatives spoke about Verify-Sy experience in combating misleading user-generated content on social media, while the third participation last year was limited to attendance.