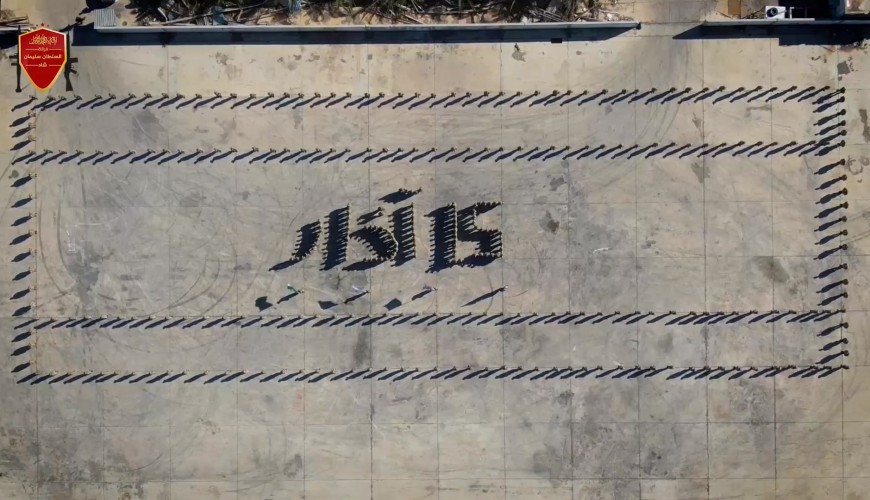 On March 15, 2021, the official Telegram channel of the Sultan Suleiman Shah Division of the First Corps in the Syrian National Army posted a video on YouTube showing its celebration of the tenth anniversary of the Syrian revolution.

The video of the faction, led by Muhammad Hussein Al-Jasem, nicknamed (Abu Amsha), showed the faction’s personnel forming (March 15), and the faction did not indicate where the video was filmed.

The expert in digital verification (Alexander McIver) who works with the “Syrian for Truth and Justice” organization, revealed in a tweet on his personal account on Twitter on March 16, using OSINT techniques that the celebration of Sultan Suleiman Shah Division was not In Syria, confirming that it took place at a military base near the coast of the Libyan city of Janzour.

Verify-Sy platform checked the location that the expert had identified, and found out that the place where the ceremony took place was actually located near the port (Sidi Bilal) in the Libyan city of Janzour, in an area surrounded by military naval bases.

In July 2020, the Sultan Suleiman Shah Division published a video of a military parade of its members celebrating the conversion of the (Hagia Sophia) Church in Turkey into a mosque in July 2020. Another is less than 100 meters from the video in the March 15 video. 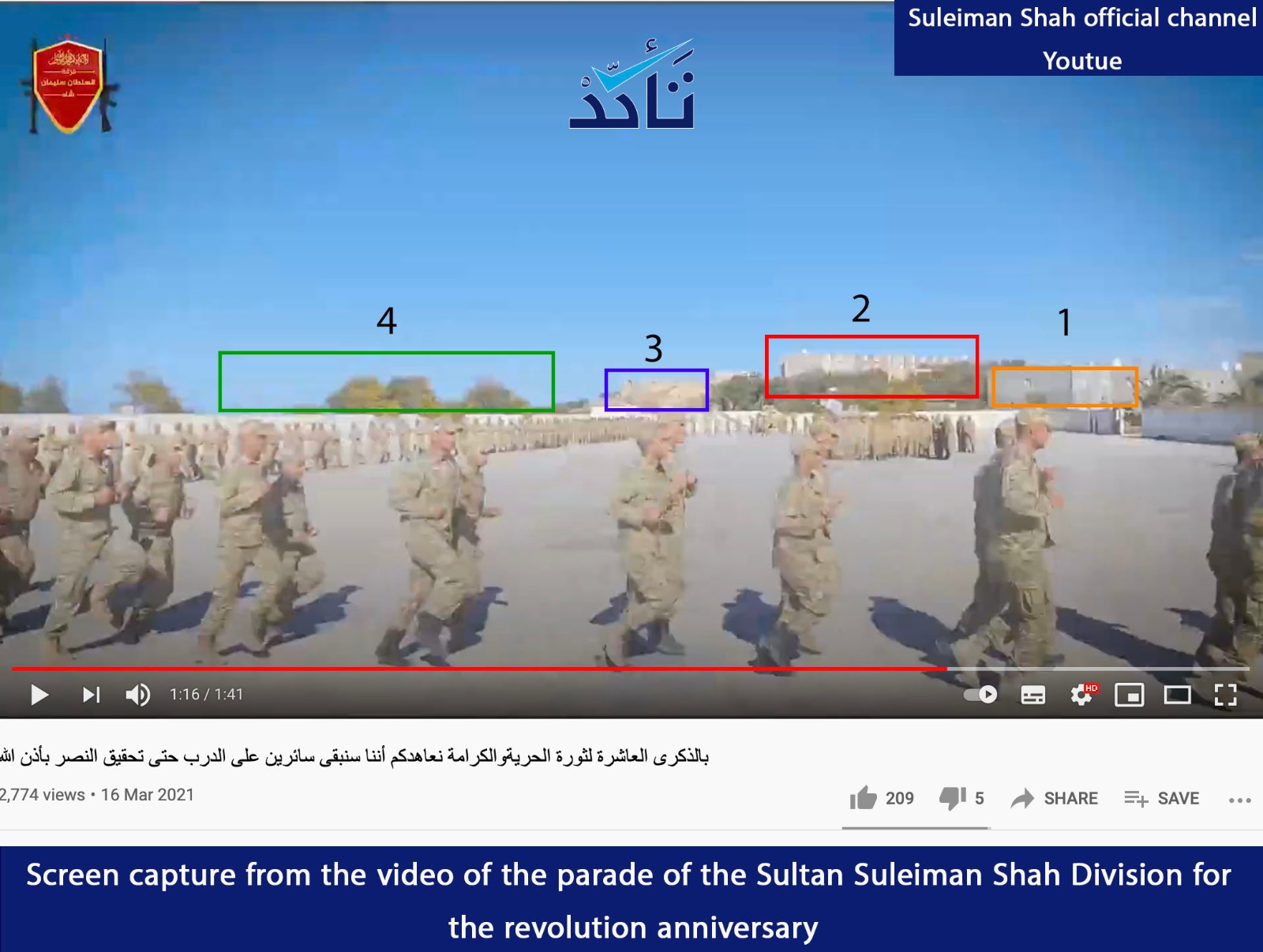 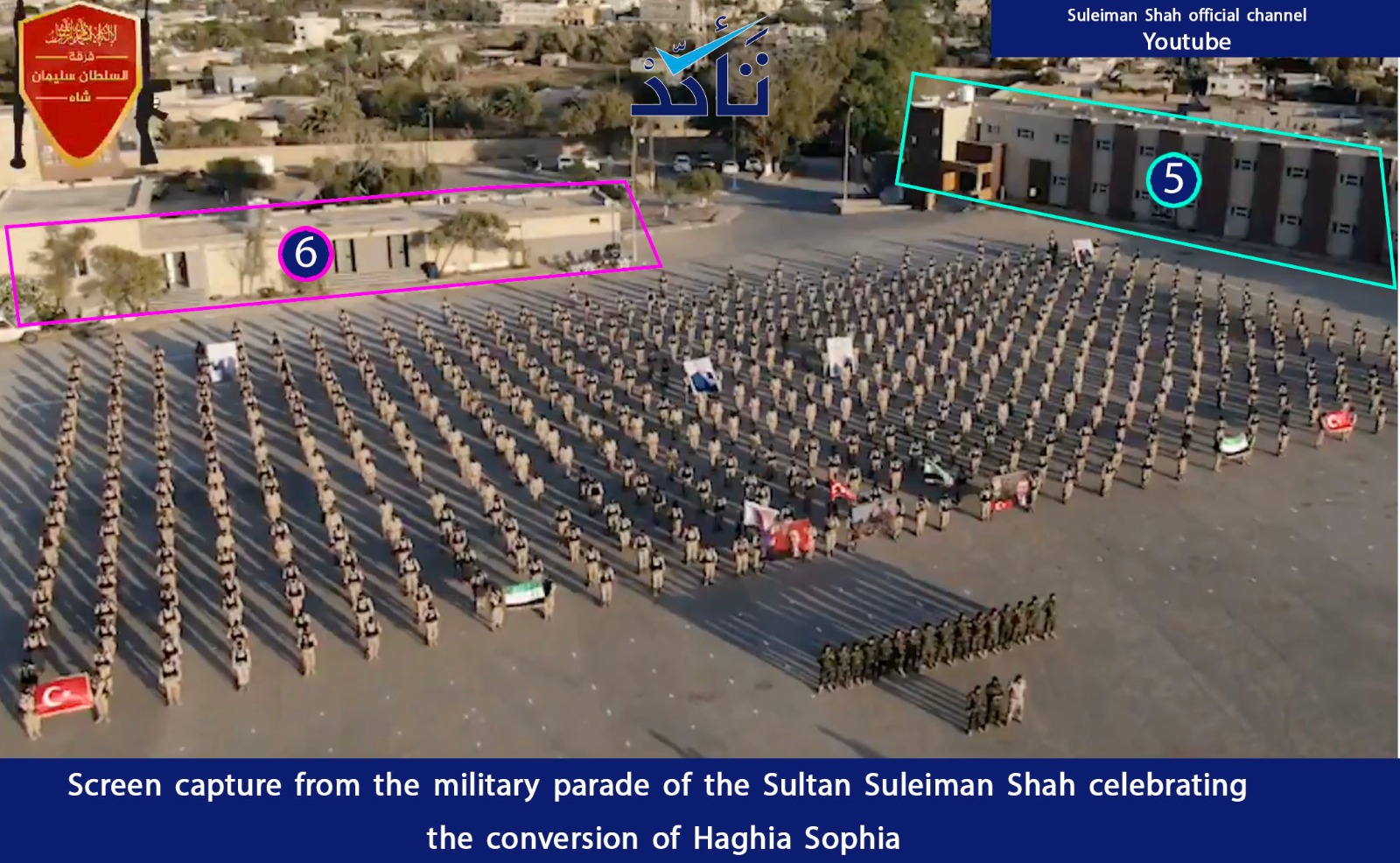 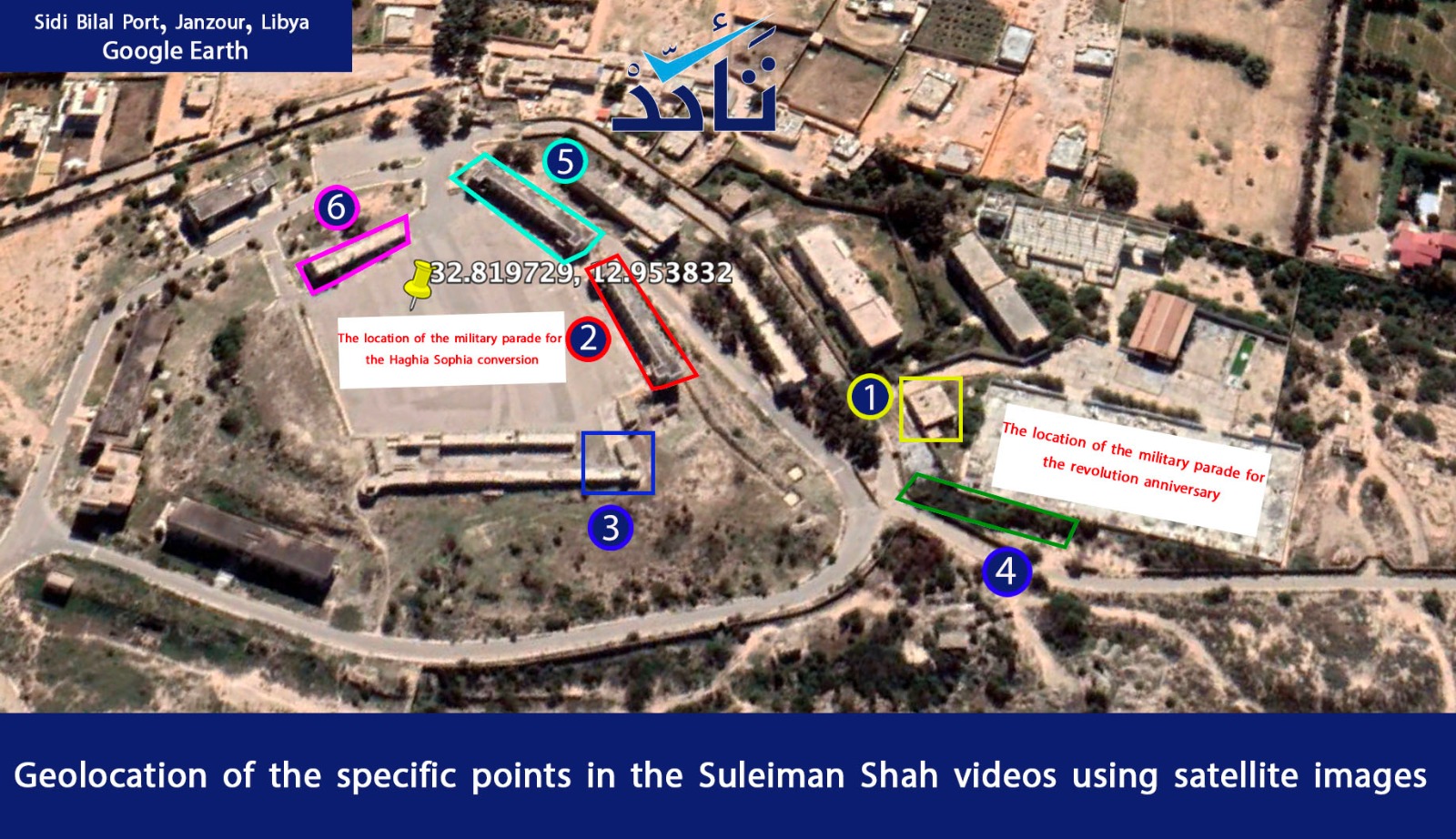 To match the previous results, Verify-Sy contacted a source in the city of Janzour and asked him about the nature of the site that we have identified on the map. The source confirmed that the site originally belongs to the port of (Sidi Bilal) and has turned since the beginning of the year 2020 into a camp for the Syrian fighters.

The source, who preferred not to be named, indicating that the building is located under the owners of the port (Sidi Bilal) in the city controlled by (the Libyan Government of National Accord), pointing out that the foreign presence in it is represented only by the Syrian militants but at the same time, he denied seeing any Turkish officers or soldiers in the port and its areas.

The source stated that "the Syrian militants do not leave the port, which is associated with the Naval Academy in the city, and Libyan brigades and forces are keeping them inside the site, which has been converted into a camp and preventing them from leaving completely." He denied any news of harassment and blackmail on the part of the Syrians. He hoped that they would withdraw from Libyan territory "due to the reconciliations that have occurred recently."

The author of this investigation tried to communicate with the commander of the (Sultan Suleiman Shah) Division, Muhammad Husayn al-Jasim, known as (Abu Amsha), through his personal account on Twitter, and presented the results that we came out with through this investigation to him, without obtaining any response despite his receipt of the messages.

The platform also contacted Youssef Hammoud, the spokesman for the (Syrian National Army) to which the (Sultan Suleiman Shah) division belongs to him, in order to present the results of the investigation that we reached to him, but Hammoud also did not respond to our messages until now, despite receiving the messages and reading them.

On December 24, 2019, Zaman Al-Wasl website quoted a military source - whose name it did not mention - that Turkey had made an offer to the Syrian National Army factions operating in the northern and eastern countryside of Aleppo, including sending fighters to fight alongside the Government of National Accord forces against the forces of Haftar.

According to the source quoted by the website, a meeting was held between representatives of the Turkish intelligence and some leaders of the National Army factions, to discuss a mechanism for preparing lists of names and numbers of fighters of those factions wishing to go to Libya.

The website referred to the meeting, which was immediately followed by the opening of the (Sultan Murad) and (Mutasim Division) factions of the (Syrian National Army), the door to voluntary registration in front of their members wishing to perform what it called (combat missions) alongside the Turkish military forces in Libya.

Reuters also reported on December 30, 2019, citing Turkish sources, as saying that (Ankara is considering sending allied Syrian fighters to Libya), as part of its military support for the Government of National Accord.

According to the agency, two senior Turkish officials and two security officials told Reuters - on condition that their names not be published - that "Ankara has not yet sent any Syrian fighters to Libya," and one of them added, "But an assessment is being prepared and meetings are being held in this regard, and there is a desire to move forward in this direction."

The spokesman for the National Army Youssef Hammoud earlier denied these accusations, and stated in a statement to Enab Baladi newspaper on December 25, 2019, any information contained in a Turkish offer to send fighters from the (Syrian National Army) forces to Libya. Hammoud said, in his statement to the newspaper "No proposal has been made to the National Army or even to the Ministry of Defense of the Syrian Interim Government on the Turkish side regarding sending fighters to Libya, and this is what we have not heard at the level of all our forces and factions."

With the continued circulation of news related to sending fighters operating in northern Syria to Libya, the Ministry of Defense in the Syrian Interim Government issued a statement on December 25, denying sending fighters to Libya, saying that "its mission is to defend the land and the Syrian people." .

The ministry said in its statement: "We, the Ministry of Defense in the Syrian Interim Government, categorically deny sending any of our forces and military formations to Libya, and our priority in the Syrian National Army is to protect our people from the regime and its Russian and Iranian supporters and the separatist terrorist parties associated with it that want to tear the homeland apart." .

On the fifteenth of June 2020, the British newspaper, The Guardian, published a report in which it stated that “two thousand Syrian fighters have arrived, or will soon arrive in Libya, coming from Turkey, to fight alongside the Government of National Accord.”

According to the report, which was quoted by Turkish, Syrian and Libyan sources, 300 fighters from the Second Division of the (National Army) were among the first batch that left Syria towards Libya in late December 2019, and a few days later, a second batch of more than 350 fighters followed them. He transported them all by air to the Libyan capital. "

Later, in January 2020, social media websites were filled with many videos, published by Libyan pages, and said that they showed Syrian fighters in Libya.

One of the videos circulated, in which a group of people wearing military uniforms and traveling in a car appeared, as one of them said during the recording that they belong to (Al-Furqan Brigade / Sultan Murad Division), adding that they are “heading to Libya to fight Haftar's forces.”

Another video recording, which Libyan pages said was of "Syrian mercenaries" on board the Libyan Afriqiyah Airways plane, has also spread. The recording shows dozens of people wearing military uniforms inside a plane, speaking Syrian accents, while some of them covered their faces when the video/grapher pointed the camera at them.

Another video circulated on Facebook at the end of January 2020, it was said that it belongs to Syrian fighters in Tripoli celebrating their first salary in dollars and the Libyan dinar.

These records and information began to be confirmed more after the news circulated in February 2020 about the arrival of the bodies of a number of fighters from the factions to northern Syria after they were killed in Libya.

Verify-Sy platform contacted the uncle of one of the officers whose bodies arrived in the northern countryside of Aleppo, to confirm that his nephew, who was not more than twenty years old, was killed in Libya, adding that he was transported there before he was killed, accompanied by dozens of fighters in northern Syria, and when we asked him about the faction that His nephew, who traveled through him to Libya, followed him, indicating that he did not know any information about the faction, because his nephew traveled suddenly without the knowledge of most of his family members, and without any details mentioned about his travel method.

The report of (The Guardian) newspaper, and all those recordings and information that spread widely on the communication sites, which talked about sending factions of the (Syrian National Army) Syrian fighters to Libya, did not receive any comment from the (National Army) or the Ministry of Defense in the government The Syrian interim government who previously denied sending any fighters to Libya.

On February 21, 2020, Turkish President Recep Tayyip Erdogan made press statements in which he confirmed for the first time the presence of “persons from the national army” in Libya.

The Turkish president said in a press release (from the second 6.17 to the second 6.25), that "his country is in Libya among the training cadres, and besides those cadres there are people from the Syrian National Army, and the Turkish president did not mention the number or description of people, but the evidence the precedent confirms that the persons from the National Army were combatants on the fronts.

In March 2020, Haftar-led Libyan National Army media published confessions of Syrian prisoners, who said that they were transferred by Turkey to Libya in exchange for a financial offer. Also, these recordings did not receive any comment from the (National Army) or the Ministry of Defense in the interim government.