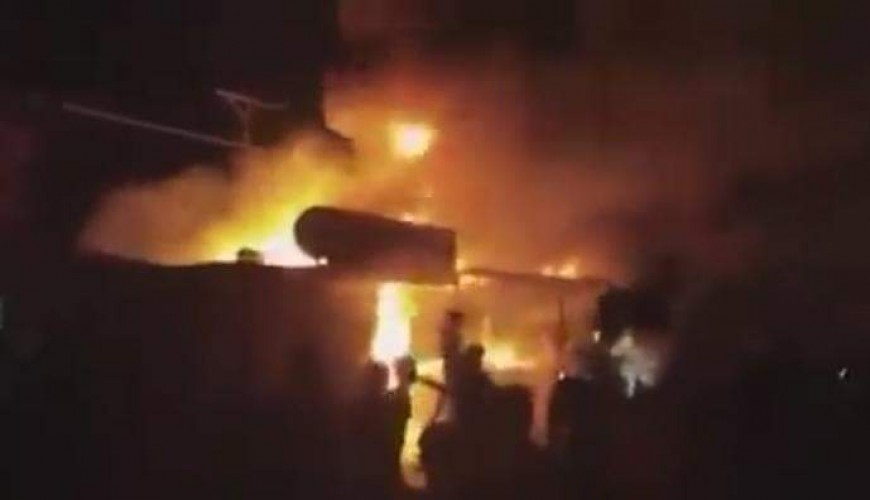 Social media pages and users have circulated news that fires broke out Wednesday, May 6, in the State Security Branch of Assad’s Mukhabarat, or Security Forces, in Latakia, Syria.

A number of pages posted a low-quality video which shows fires breaking out in an unknown facility with bystanders screaming.

Step News Agency had posted the news on Twitter and Facebook then removed it and posted a correction. Other news pages, such as Al-Issa News Agency, have claimed that supporters of Rifaat al-Assad attacked the State Security Branch in Latakia.

Rifaat al-Assad is the brother of Hafez al-Assad, the founder of the dictatorship in Syria and the father of Bashar al-Assad. Rifaat is dubbed the "Butcher of Hama" and accused of embezzling millions in European real estate, Qantara reported.

Footage wasn’t taken in Latakia, fires didn’t break out in the State Security Branch in Latakia

Verify-Sy Platform closely followed the news on social media and found that some social media users said the video shows fires in the Zaatari refugee camp.

After fact-checking the claims, we found that, as referred by these users, the fires broke out in shops in the Zaatari refugee camp in Jordan.

“The civil defense dealt with a fire that broke out inside the Zaatari camp and stormed seven shops as a result of an electrical fault. There were no human casualties,” Jordanian media outlets quoted the spokesman for the Jordanian Public Security Directorate as saying.

In addition, local sources in Latakia denied to Verify-Sy the occurrence of any visible fire in the State Security Branch or the Al-Mashrou’ Al-Thani area where the branch is located. Furthermore, they denied hearing gunfire or unusual armed confrontations in the area.

These videos coincided with two unusual appearances of Rami Makhlouf, a cousin of Bashar al-Assad who is known as the business arm of the regime. In his first Facebook videos, Makhlouf said the “Syrian State” had demanded him to pay 130 billion Syrian pounds in taxes, while in the second he said some of his employees had been arrested.

His videos are considered to show a rift at the highest levels of the Assad regime.