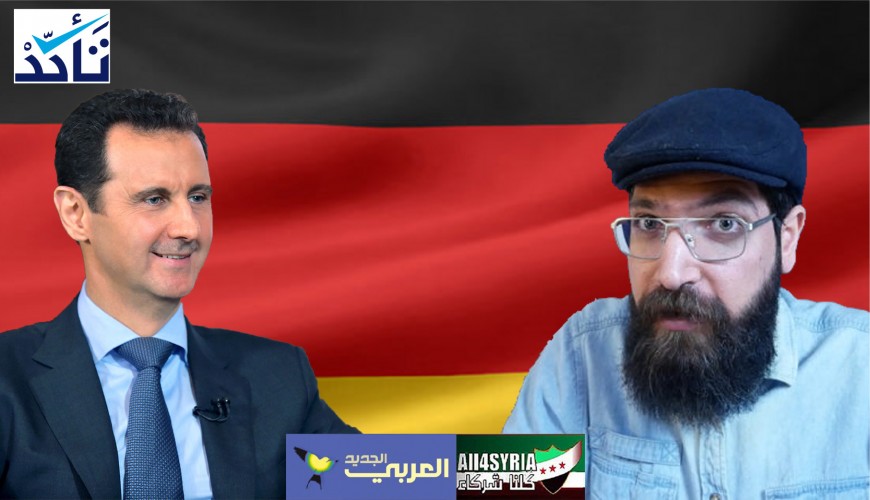 The claims that Kevork Almassian, a Syrian refugee granted asylum in Germany and an Assad loyalist, have been expelled from Germany have been widely circulated on social media.

Tweeter @manxdron wrote Friday, May 8, that “After (Almassian) had incited the AfD to pressure for expelling Syrians from Germany, a decision to expel him and send him back to the bosom of the homeland was issued.” The return to the bosom of the homeland is a term used ironically by anti-Assad Syrians to describe the voluntary return to the Assad-held areas or the so-called reconciliations with Assad.

Abdulrahman al-Khateeb, a Syrian dissident, also wrote on Twitter that Almassian had been expelled from Germany. His post was retweeted over 260 times.

In addition, Facebook page Kulluna Shuraka’ (We are all Partners), followed by over 400,000 users, claimed the German authorities had announced reviewing an Assad loyalist’s asylum case who works for the Alternative for Germany (AFD) political party, citing The New Arab.

Almassian wasn’t expelled from Germany, his asylum case was not specifically reviewed

Verify-Sy Platform reached out to @manxdron on Twitter to ask for the source of the claim. @manxdron pointed out that “Syrian-German lawyer Nahla Othman is following up with Almassian’s case,” before deleting the tweet and posting an apology for posting the news without verification.

Syrian-German lawyer Nahla Othman, specialized in asylum and refugee affairs, told Verify-Sy that she had not made such claims about expelling Almassian. She referred to her statement on t-online.de, published last year, in which she had specified the reasons that may allow the German authorities to review Almassian’s case. Her statement followed a campaign launched by anti-Assad Syrian activists which had demanded the German authorities to review his asylum status because, as a supporter of Assad, Assad-held territories in Syria are safe to him.

In terms of the report of Kulluna Shuraka’, and after conducting an in-depth search, Verify-Sy found that neither the Federal Office for Migration (BAMF) nor any other German official body have issued a statement that it would specifically review Almassani’s asylum case or that he was expelled from the country.

T-online.de reported that the BAMF hasn’t responded to its questions on Almassian’s situation, but stated that asylum cases that have been approved since 2015 will be reviewed.

To summarize, neither the news that Kevork Almassian was expelled from Germany or the news that the German authorities have specifically reviewed his asylum case are true. Both claims are unsourced and haven’t been reported by German media or Germany’s Federal Office for Migration (BAMF).

Kevork Almassian’s case sparked controversy in Germany after the German association of public broadcasters (ARD) and t-online.de reported on his relation with the anti-refugees far-right AFD and sparked a debate about his eligibility for asylum in the country as a loyalist of the Assad regime that controls the largest portion of Syria compared to the other military forces.

Kevork Almassian is a Syrian loyal to the Assad regime. He arrived in Europe in October 2015 after obtaining a visa to engage in a political conference in Switzerland before applying for asylum in Germany.

He works for German politician Björn Höcke, the far-right AFD’s chairman in the state of Thuringia. In November 2019, members of the AfD lawmakers met Assad representatives in Syria to prove that the country is a "safe country of origin," DW reported.

Almassian runs a YouTube channel, “Syriana Analysis,” by which he promotes Assad’s propoganda of “fighting radical Islam” in Syria.

In 2018, he promoted the Assadi false narrative that Hamza al-Khateeb, a 13-year-old Syrian boy, was killed on the spot while attacking Assad’s army to enslave women.

In fact, Hamza al-Khateeb was detained, tortured, and murdered by Assad’s forces. On May 25, Assad’s security forces returned the body of 13-year-old child to his family in Jeeza, near Daraa, bearing what appeared to be signs of torture. He had been injured and detained weeks earlier while attempting to bring food to Daraa, HRW reported. Daraa at the time was besieged by Assad’s army.

Video posted online shows his battered, purple face. His skin is scrawled with cuts, gashes, deep burns and bullet wounds that would probably have injured but not killed. His jaw and kneecaps are shattered, according to an unidentified narrator, and his penis chopped off, The New York Times reported.

Is this a French officer who just finished his mission with ISIS?