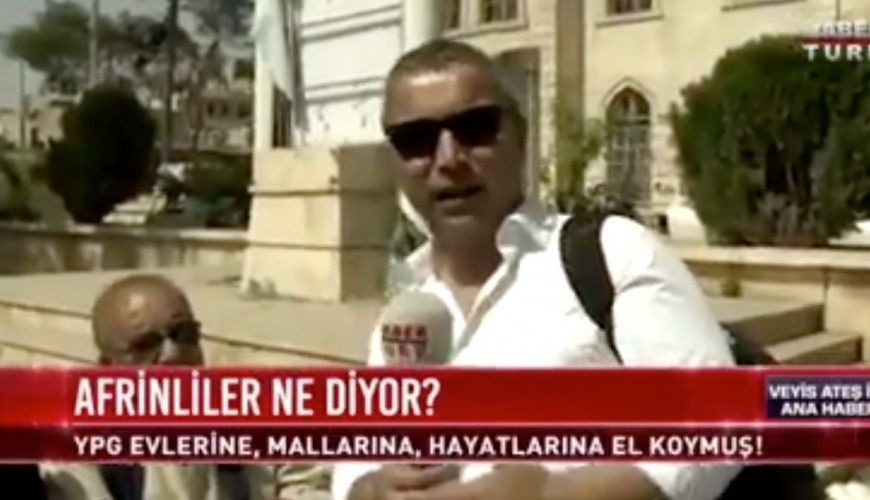 Turkish channel Haber Turk published an interview by its reporter in Efrin during distributing aid to the city’s locals after Turkish army and Olive Branch FSA groups captured it.

The reporter asked the man on the situation in Efrin after the Turkish army entered and the man answered in Kurdish language which what the translator translated as: we don’t want to host who is not from Efrin, YPG are not from Efrin and they are an organization doesn’t belong to Efrin, they came here to attack us and take our money and violated our honor, they are not the real owners of this area, we love Turkey and want it to be here and kick them away.

After Verify-Sy checked the translation, it turns out that the translator tampered what the man said, the man said in Kurdish: we are locals of Efrin and don’t want any armed presence here because the Free Army is not free, they are terrorists and they came here to steal from us, they took our houses and violated our honor last night when they raped 3 girls who are 15 years old, we only want the Turkish police here and don’t want any other armed fighters.

The man continued in praising the Turkish forces and dispraised the FSA while he didn’t mention YPG fighters at all on the contrary to what the translator said.

We couldn’t verify the authenticity of the violations the man mentioned and accused FSA fighters of doing it after capturing Efrin city 10 days ago.