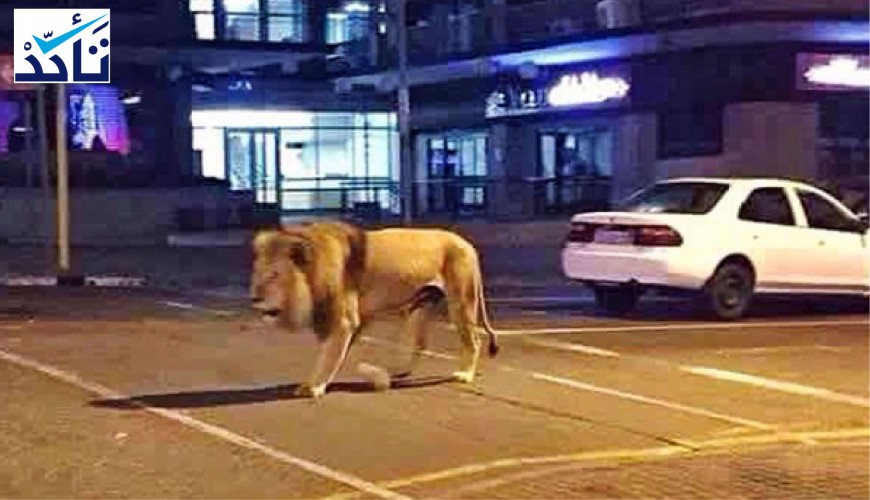 Has Russia Unleashed Lions on Streets to Force Home Quarantine due to Coronavirus?

Websites and social media pages have claimed on Monday March 22, 2020, that Russian authorities unleashed lions on the streets to intimidate people and force them to home quarantine to prevent the spread of the novel coronavirus.

A photo of a lion on a street has been shared with a text that reads, “Breaking: Russia unleashes more than 500 lions on its streets to ensure people stay home during the outbreak of the pandemic. Vladimir Putin has released over 500 lions to make people stay home.”

The Arab News Network (ArabNN) has used an RT report that shows a tiger strolling among vehicles, without clarifying the content of the video or how it fits within the context.

The news is false. The photo wasn’t taken in Russia

Using Google reverse image search, Verify-Sy Platform found that the photo of the lion was taken in the city of johannesburg, South Africa on April 12, 2016, after a local film company had borrowed the lion from a nearby lion park and released him in the Braamfontein district in order to film him in a movie scene.

Those who have been circulating the false news used the BreakYourOwnNews.com website, whose name can be seen on the upper-right corner, to fabricate the “Breaking News” image.

The report used by the ArabNN shows a tiger roaming in the road linking the Russian cities of Vladivostok and Khabarovsk. RT posted the footage on Youtube on October 21, 2013, and the two news presenters said it was unknown from where the tiger came, and that passersby had taken and uploaded the footage.

How has the rumor that “lions have been unleashed on the streets of Russia” spread?

Tens of Twitter and Facebook accounts have shared this false news, gaining hundreds of shares and reactions. Among them is tweeter @talalalenazi_9 which has over 135,000 followers. The tweeter has posted the photo of the lion with a text that reads, “Russia unleashes 500 lions on the streets to intimidate people into staying home. Praise be to god, we don’t need this, because we obey our government.” An archived link to the tweet.

Another tweeter, @CelebrityArb, has posted it with a text that reads, “Russia imposes curfew by unleashing 500 lions on its streets.” An archived link to the tweet.

Also, tweeter @YasMow wrote, “Putin releases 500 lions on the streets of Russia to make everyone stay home. A useful plan for some.” An archived link to the tweet.

A website named the Arab News Network has also published the news with false details, claiming that Russian president Vladimir Putin said, “Thanks to tigers, the international quarantine will be respected in Russia.” The quotation is fabricated.

Russian authorities will not impose an all-out order to stay at home, the BBC reported. It has also closed its borders with several countries and suspended most flights to and from the European Union in addition to other countries to try to contain the spread of the novel virus. There have been 367 cases of coronavirus infections reported nationwide so far and one death, The Moscow Times reported.