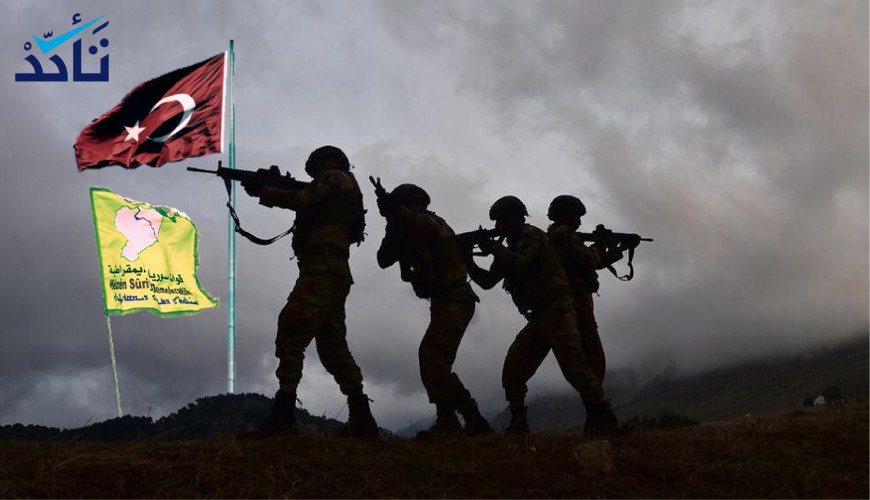 News websites and social media accounts have circulated Wednesday a number of fabricated photos and fake news, after launching a military operation by the Turkish army and its allies in areas east of the Euphrates near the Syria-Turkey border.

A photo of two injured children has been circulated; pro- Democratic Union Party (PYD) websites and pages said that the children were injured due to Turkish shelling on areas east of the Euphrates.

A Facebook page called “Afrin Madinet al-Salam” has posted the photo claiming that it shows the initial results of the Turkish shelling on the Ra’s al-Ein city in the countryside of al-Hasaka, near the Syria-Turkey border.

Wajh al-Hak news agency published the photo around 09:30 pm in a news report in which it reported on the arterially shelling on the village of Hamdunah and Khazri western of the city of Amouda in the countryside of al-Hasaka, without pointing out that the photo is of the recent developments.

Verify-Sy inspected the photo and reached out to the photo/grapher that took it; our platform reached the conclusion that it was not taken after the Turkish shelling on al-Hasaka countryside.

The children who appear in the photo were wounded because of Assad airstrikes on the town of Ma’rashourien in the southern countryside of Idlib.

In addition, Step News Agency published a news report on the death of two Christian victims in al-Qamishli after a Turkish shelling.

Verify-Sy inspected the photo published in this news piece, and found that it is of a woman called Juliet Nicola who was injured in the back and belly because of shelling by the Turkish army and its allies on al-Qamishli’s al-Bashiriah neighborhood; her husband, Fadi Habsno, was also injured in the head and belly. Both of them were hospitalized to the al-Salam hospital in the city. Both of them are still alive, according to a source at the al-Salam hospital.

A twitter account attributed to General Commander of Jaysh al-Izza Major Jameel al-Saleh posted a series of tweets calling on the Syrian opposition factions not to join the Turkish military operations eastern of the Euphrates.

One of these tweets reads, “To my brothers, the members of National Liberation, it hurts me

that you leave the trench of Jihad to a completely different trench, aiming to

expand the international influence eastern of the Euphrates. You only have one

life, don’t waste it in a lost business. We ask the glorified God to make our

Within a related context, Facebook accounts and groups have posted a video shows targeting members of the PYD by the Turkish army while they were infiltrating to a location of the army in Syria. However, the video dates back to November 2015 in the Turkish city of Diyarbakir.

A Facebook page called “Qamishlo al-Hadath” has posted photos attached to news about Turkish shelling that targeted the city of Amouda in the countryside of Qamishli.

Field sources told Verify-Sy that the photo shows the effects of the PYD shelling that targeted the Jarablus City camp in the countryside of Aleppo.

Turkey announced Wednesday launching a military operation, “Operation Peace Spring,” east of the Euphrates in Syria, aiming to seize control of the areas held by the PYD-led Syrian Democratic Forces.

Since the beginning of the operation, the Turkish forces has seized control of eight villages located in east and west of the border city of Tal Abyad in Raqqa’s northern countryside, located in opposite to the Turkish city of Akcakale; it has also captured six villages near the border city of Ra’s al-Ein in the countryside of al-Hasaka, which is located opposite to the district of Jilan Binar in the Turkish province of Sanliurfa.