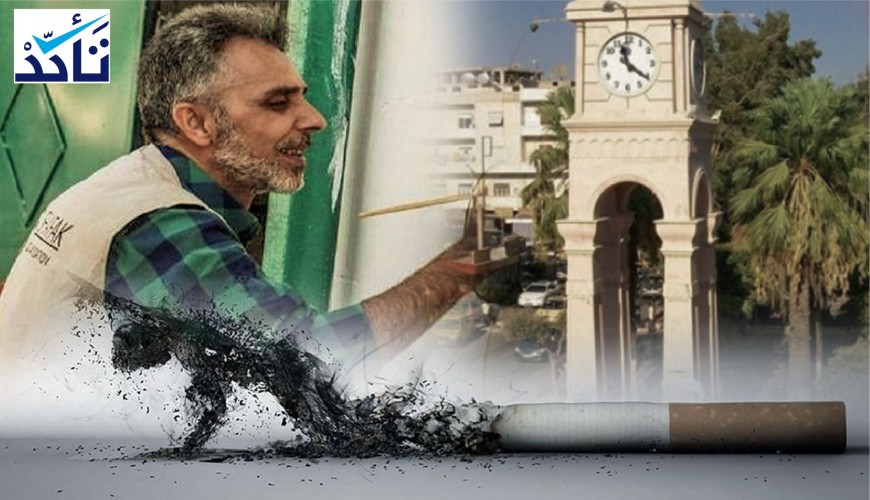 On May 4, 2020, news that pro-Revolution Syrian artist Adnan Kardash was killed in the city of Idlib has been circulated on social media. It’s been claimed that the late artist was murdered because he had smoked a cigarette in public before Iftar.

Iftar is the evening meal with which Muslims end their daily Ramadan fast at sunset.

Verify-Sy Platform investigated the claim and found that Kardash was killed after intervening to solve a brawl. A detailed description of the incident can be found in the last section of this report.

Adnan Kardash, 49, was a husband and a father of five. He was an art teacher in primary and secondary schools in the city of Idlib. He was a revolutionary artist who used drawing as a method to oppose the Assad regime. He  joined the Syrian Revolution using his drawings which were raised at demonstrations and he painted murals in the province of Idlib.

News website The Syrian Observer reported that Adnan Kardash was killed “during armed clashes involving grenades and medium weapons... all because he smoked a cigarette in public before Iftar,” citing Lebanese online newspaper Al-Modon.

Al-Modon, however, reported on the incident claiming the murder took place due to smoking a cigarette in public before Iftar but hasn’t specifically pointed out that Kardash smoked it.

Besides, Teller Report reported on the incident in a news report titled, “A cigarette before breakfast causes armed clashes and the death of a Syrian artist.” It claimed Kardash smoked a cigarette in public before breakfast, citing news website emaratalyoum.com which, as Al-Modon, hasn’t specifically pointed out to the one who had done it.

In addition, the false claims have been circulated on Twitter. U.S. academic Joshua Landis, who specializes in the Middle East and Syria, tweeted The Syrian Observer’s report. His post was retweeted over 70 times. Other tweeters such as @abdullah2030MBS have repeated the same false claim.

According to identical narratives of the incident provided to Verify-Sy Platform by ten of the victim’s friends and eyewitnesses, Kardash’s brother Radwan invited him for Iftar on May 4.

The quarrel begun right before sunset in front of Radwan’s home in the Al-Naourah neighborhood of Idlib when the assaulter Mohammad Nairabi, a former member of the Jund al-Aqsa Islamist armed group, had a quarrel with a group of young men while passing by on his motorcycle.

One of Kardash’s nephews, Jameel, a hawker, was standing behind his stall to sell used clothes while keeping an eye on the dispute. The assaulter Nairabi approached Jameel, and after asking him why he was staring at him, he punched him in the face and Jameel punched him back. Nairabi vandalized Jameel’s stall before loading his rifle and shooting near Jameel. The residents, including the late artist, disarmed the assaulter and Kardash asked the assaulter to pass by after Iftar to resolve the dispute and give him his weapon back.

The assaulter returned after sunset with his armed friends and immediately started shooting in the air. When Kardash came out of his brother’s home, Nairabi threw a grenade at the house. The grenade bounced off the balcony and exploded near both the assaulter and the victim. At that moment one of the assaulter’s friends had opened fire killing both Kardash and Nairabi and quickly ran off from the place with the rest of his group.

Of note, Nairabi formed an armed group after the dissolvement of the Jund al-Aqsa organization.