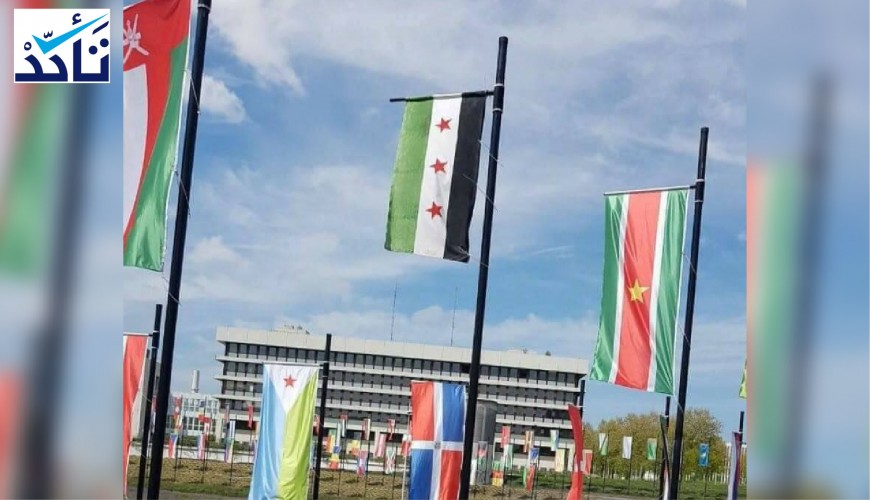 Has Germany Recognized the Flag of the Revolution as Syria’s Flag?

Several social media profiles and pages have circulated the claims, such as @GenevaUpdates on Facebook which said in 2017 that “Germany replaces the regime’s flag with the Revolution’s one near the conference hall in Bonn.” Also, a Facebook profile named Turkmani Ahmad and twitter user @rutar33 have circulated the same claims.

By using Google’s reverse image search and adding suitable keywords, Verify-Sy found the footage and photos of the incident of raising the flag of the Syrian Revolution date back to May 2017 when a Syrian young man downed the regime’s flag, replacing it with the flag of the Revolution.

At the time, misinformation accompanied the circulation of the footage; it was claimed that the German authorities removed the regime’s flag and adopted the Revolution’s one at the UN Campus.

After conducting further investigation, Verify-Sy Platform identified the person who raised the flag, Muhannad Kh., resident of Bonn, from whom our team obtained footage of the incident that confirms he was the one behind the flag action.

Kh. told Verify-Sy he replaced the regime’s flag on May 4, 2017 with the help of two of his friends. He also said the Revolution’s flag had lasted for a few days before it was removed, and that the flagpole has been empty since then.

German authorities have not issued any decision to adopt the flag of the Syrian Revolution as Syria’s flag instead of the regime’s two-green-star flag.

Of note, the Assad regime’s embassy is still open in Berlin.