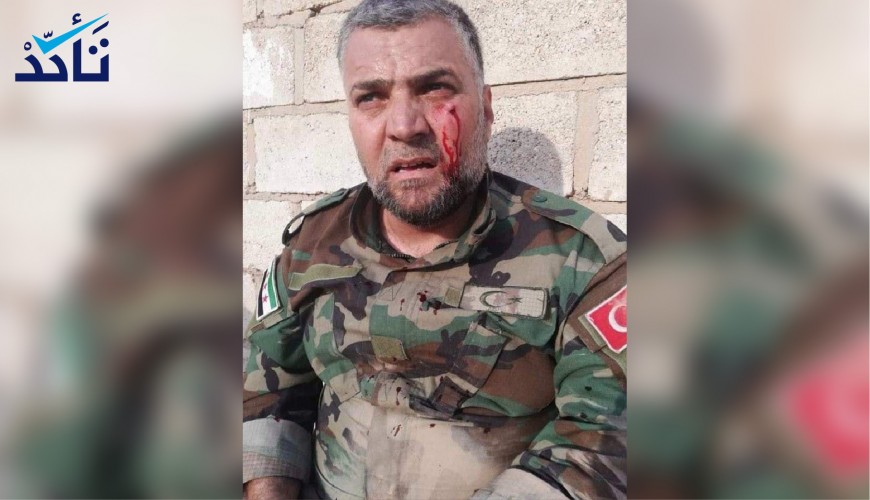 Pro-Democratic Union Party (PYD) social media pages and profiles have reported that the PYD have arrested Milad al-Hammoud, one of the commanders at the al-Hamza Special Forces faction of the Turkish-backed National Army.

Pro-PYD Facebook page “Baravi tv” said that al-Hammoud was arrested. Also, pro-PYD Facebook page “Huna Kurdistan” (Here is Kurdistan) reported that five combatants of the Free Syrian Army turned themselves in to the Syrian Democratic Forces (SDF) in the border city of Ra’s al-Ein in al-Hasaka countryside, attaching a photo of al-Hammoud, after his injury, to its post.

Verify-Sy platform checked the news and reached out to commander Milad al-Hammoud; it turned out that the news is untrue, and during that al-Hammoud posted on Facebook saying that he was injured and that the battles are ongoing.

Speaking of the circumstances of the battle in which he participated with his group against the PYD in the border city of Rae’s al-Ein, al-Hammoud told Verify-Sy: “We built-up of troops and entered the battle of Ra’s al-Ein. Two of our members were wounded by sniper shots; I headed to pull them to keep them away from the sniper shooting range,” adding that “we advanced and killed by machine guns one of the snipers positioned on a minaret of a mosque.”

“After that, we entered with two combatants a street behind the mosque, and were surprised by an ambush by 6 combatants, four men and two females,” he added. “Clashes erupted between us; and one of the female fighters shot (at us), and a bullet fragment hit me near my eye on the left cheek.”

Al-Hammoud denied arresting any member of the National Army by the PYD, pointing out that one combatant was killed and others suffered “minor and moderate injuries.”

The commander said that it is likely to fully seize control of the city of Ra’s al-Ein in the coming two days.

The Turkish forces captured villages near the border city of Ra’s al-Ein in the countryside of al-Hasaka located opposite to the district of Jilan Binar in the Turkish province of Sanliurfa.

Milad al-Hammoud served as the commander of Military Police in the city of Afrin, after the Turkish-backed factions captured the city in mid-March 2018. Al-Hammoud is considered to be one of the most prominent commanders of the Second Corps of the Free Syrian Army.

Turkey announced Wednesday launching a military operation east of the Euphrates, “Operation Peace Spring.” During the past two days, a number of fake news and misleading photos and videos have circulated about the operation have spread.

Verify-Sy team inspected around 15 news report, photo, and video that circulated on social media and news websites; our team has clarified them in a number of written and visualized reports, which were posted on Verify-Sy website and social media accounts.