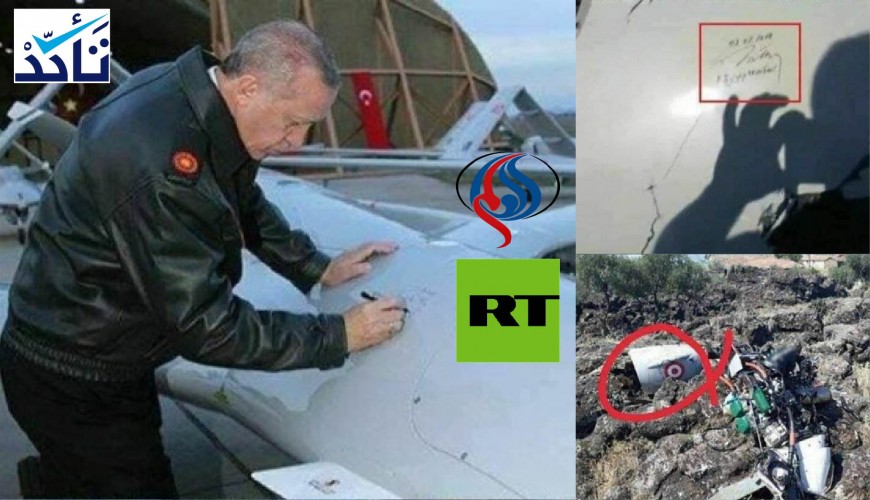 Truth behind Wrecked Drone that Has Erdogan’s Signature

A photo of a drone wreck, which has Turkey’s President Recep Tayyip Erdogan’s signature, has been circulated on social media. It has been claimed that the photo shows a drone downed by the Assad forces’s air defense system during the recent battles in rural Aleppo between Assad’s forces and the Turkish-backed syrian opposition factions.

The photo has been circulated by a number of Russian, Iranian, Arab, and Syrian news websites, with another photo of another drone wreck. The two photos have been shared thousands of times on social media, but, in fact, they are unrelated to the current battles of rural Idlib. The images date back to mid-2018, when a Bayraktar TB2 drone crashed in the Hassa district of Hatay, southern Turkey.

How have the misleading photos gone viral?

Syrian media professional Mustafa Abdi has posted the photos on his Facebook page, which has around 75 followers, as well as an image of Turkey’s President Erdogan signing a drone. “Erdogan’s signature appears on drone wreck mistakenly downed by his armed allies two days ago over Saraqib, Idlib,” Abdo wrote on Facebook.

The Russian-language version of RT has also included the photos in a report titled, “Erdogan’s Personal Signature on Wrecked Plane Downed by Syrian Army over Idlib.” RT has attributed the photo to @SteeleSyAA on Twitter, which has over 4500 followers, at the exact time of posting its tweet. “Turkish President hand signs a Turkish military drone before it deployment and the Syrian Arab Army air defence forces promptly shoots it down!,” the tweet reads.

In addition, the photos and the false claims have also been posted by Iranian Al-Alam News Network, Lebanese websites such as Lebanon 24, and pro-Democratic Union Party (PYD) XEBER 24.

What’s the truth behind the two photos?

On Jun. 30, 2018, Turkish news outlets, such as Aksam and Cumhuriyet, published the photos reporting that they show a Turkish-made Bayraktar TB2 wrecked drone, which had been crashed in the Hasa district of Hatay, southern Turkey.

It is true that the photos show a Turkish-made Bayraktar TB2 drone wreck,

But the photo that shows Erdogan’s signature on a wrecked drone was taken from footage that has the watermark of Turkey's Ikhlas news agency. The footage was published on Jun. 30, 2018, on a YouTube channel named “Hatay İnternet Tv.”

An unmanned aerial vehicle (UAV) of the Turkish Armed Forces was downed in an opposition-controlled area between al-Nairab, Kmisan, and Sermin. The Ministry of Interior of the Assad regime has posted on Facebook photos of what it claimed to be the drone. It said “the Syrian air defense’s fire” had downed it. The photo that has Erdogan’s signature or the other debunked photos don’t appear in the Facebook post. Besides, Verify-Sy Platform could not verify that these photos show the downed drone.

On the other hand, other sources said the opposition factions had mistakenly shot the UAV. Our team could not verify which party downed the aircraft that was shot on the frontline.