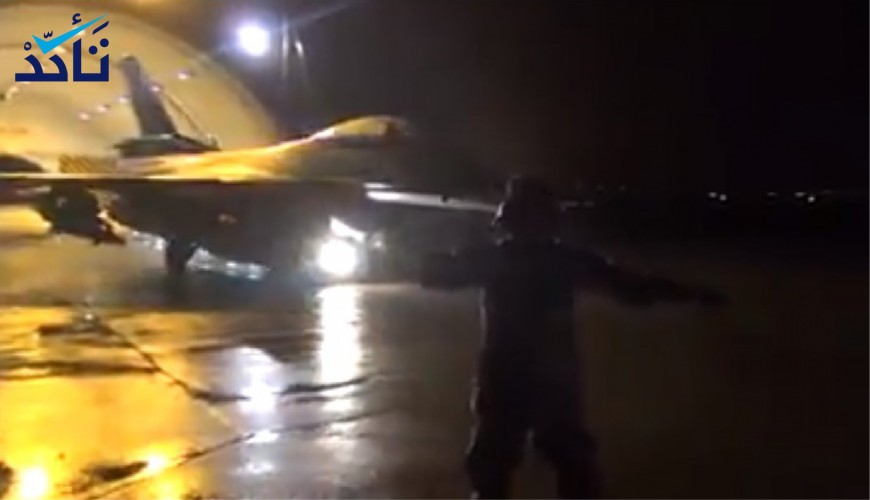 Footage of a quick preparation of an F-16 fighter jet of Turkey’s army has been circulated today on social media. It has been claimed that the video was recently taken and that it coincided with Turkey’s and its allies’ military operation against the Assad regime forces in rural Idlib.

Al-Furat News Agency, a Facebook new page, has posted the video earlier today, claiming that it shows “the moment when a Turkish F-16 plane took off then targeted a command center of Assad’s militias.” Another Facebook page, Raqqa Our Family, has posted the same video with a text that reads, “The Turkish army published footage of an F-16 taking off and targeting a conference base of Assad’s militias in Aleppo.”

Here is an archived link of al-Furat News Agency’s post.

Here is an archived link of Raqqa Our Family’s post.

Footage is not related to the current battles in rural Idlib, the fighter jet did not attack Assad’s forces

Using the reverse search technique and suitable keywords, Verify-Sy Platform found that the footage TRT Haber had posted the video around 2 years ago under the title, “Turkish Armed Forces (TAF), Clip Shows the Difficult Task of Pilots.” The video’s description on youTube reads, “They are the ‘steel wings’ of the sky... They are executing the orders and taking off (flying) once alarmed.” The time and location start to be shown at 0:03 of the video, which is Turkey’s Diyarbakir, a province where clashes between the turkish army and Kurdistan Workers' Party (PKK) occur.

Another YouTube channel named “LOOK !WHAT HAPPENED” published the video under the title, “What Will Our F16 Pilots Do When They Receive Orders?” Also, YouTube channel enBursa T posted the same video on Feb. 22, 2018, the same day it was published by the other two channels, reporting that the Turkish General Staff published the video that shows “warplanes taking off in preparation for attacking terrorist targets in Operation Olive Branch.”

Verify-Sy Platform was not able to verify the targets shown in the video. However, the fact that it was posted around 2 years ago refutes its relation with the ongoing battles in Idlib. Also, it refutes the claim that the fighter jet targeted Assad’s forces because Ankara has not directly engaged in clashes with the Assad forces until recently  in Idlib.