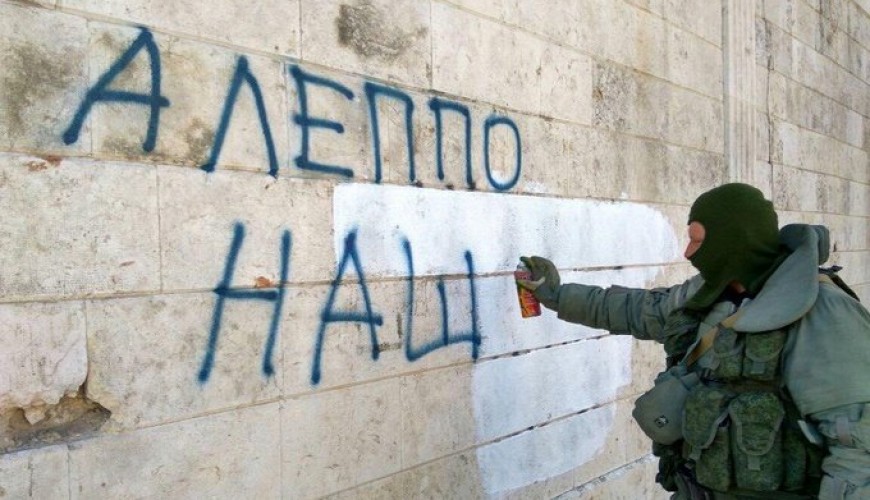 Russian Phrase “Aleppo Is Ours” Was Written Over 3 Years Ago

Since yesterday, Feb. 17, 2020, a photo of a Russian soldier who appears holding a spray bottle and facing a wall on which a Russian phrase, “Алеппо наш,” was witten, which means “Aleppo is ours.”

Some social media pages have claimed the photo was taken recently, after the Assad regime gained complete control over all areas that were under the control of the Syrian armed opposition; among them are Syrian online newspaper “Jesr Press,” which has over 33,000 followers on Facebook, and “As-Suwayda 24,” which has over 222,000 followers on Facebook.

Also, several social media users have posted the photo without specifying when it was taken. This comes as the Assad forces and its allied have seized control of the Jamyet al-Zahra area, the al-Layramoun neighbourhood, the ar-Rashedeen al-Khamseh area in northwest Aleppo city; among these users are German journalist Julian Röpcke and Iraqi researcher Faleh ash-Shebli.

Neither the photo nor the phrase are recent

As many social media users suggested, the photo was taken in Aleppo city. It, however, was not taken recently. Kyle Orton, a U.K.-based researcher, posted the photo in March 2017, which shows the Russian phrase, “Алеппо наш,” and the internationally recognized peace sign (☮️) along with a Russian word, “УРА,” which is used as a chant to express victory or as a military salute. The phrase was most likely written after the Assad regime and its allies had captured all neighbourhoods of eastern Aleppo and had forcefully displaced its residents in 2016.

At the time, the U.N. human rights office reported that it had reliable evidence that up to 82 civilians were killed on spot by the Assad forces. “The reports that civilians - including children - are being massacred in cold blood in their homes by Syrian government forces are deeply shocking but not unexpected given their conduct to date,” said Lynn Maalouf, Deputy Director for Research at Amnesty International's Beirut Regional office.