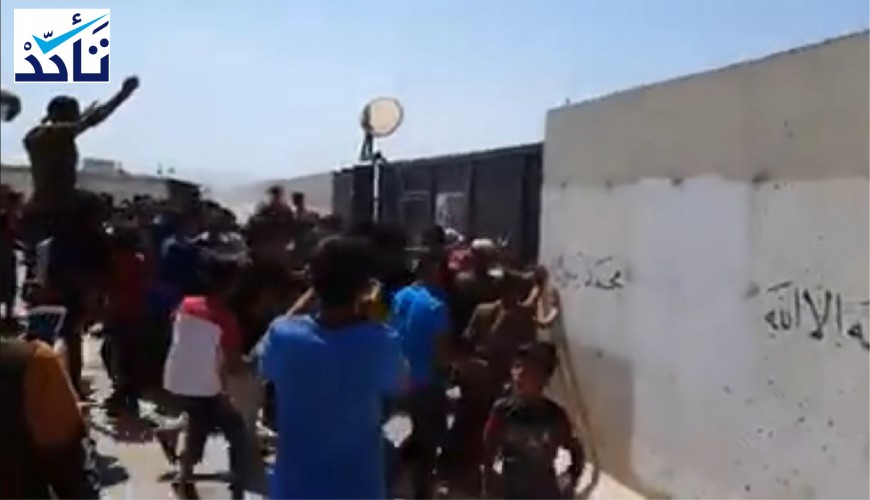 What Happened During Demonstrations near Syria-Turkey Border?

Media outlets along with social media accounts and pages have circulated misinformation about demonstrations yesterday in Idlib province, especially near Syria-Turkey border.

A page called “Wakalet Wajeh al-Hak al-Ekhbariah” (Rightness News Agency) has claimed that “the Turkish army shoot at protesters in the Bab al-Hawa crossing; one person was reportedly killed in these clashes and other wounded and hospitalized.” Another page called “Al-Sulta al-Rabe’a” (The Fourth Estate) has claimed that “the Turkish army targeted with live bullets the protestors causing injuries at the Kherbet al-Jawz crossing, after clashes between both sides.”

Besides, a Telegram channel called “Ehtimelat News” posted a photo of young men gathered around a military vehicle. It has claimed that “the protestors have taken over a Turkish Gendarmerie vehicle.” In addition, pro-Syrian Democratic Forces “Manbij Live” page has claimed that “a protestor was shot dead by the Turkish army.” Some pages have even claimed that “masses of protestors broke into Syria-Turkey border in Atmeh reaching the Turkish town of Reyhanli. 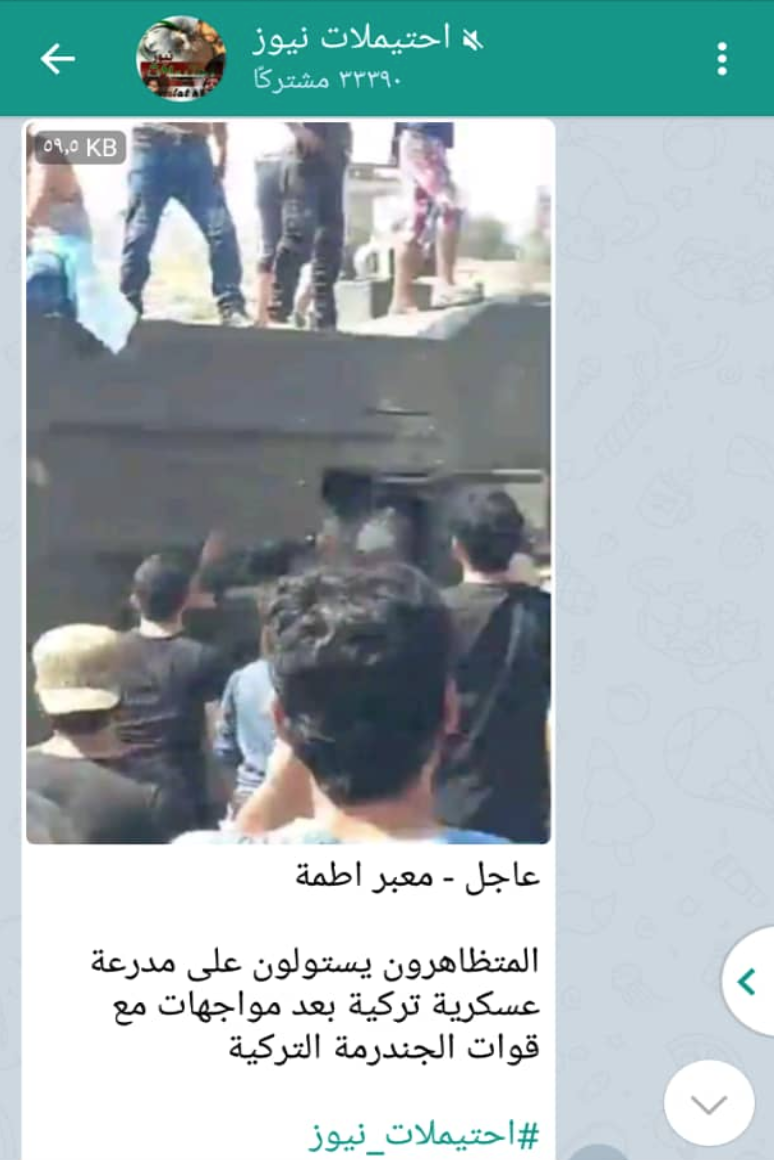 In addition, Al-Arabiya TV channel has claimed that the demonstrations “are in a protest against the Turkish shelling and the closure of borders.” In addition, “xebers24” website has claimed that “the Turkish authorities have completely shut down the borders until further notice because of the protests that occurred at the crossing.”

Through our reporters and field sources, we followed the demonstrations that took place in the Syrian cities of Bza’a, Mare’, Einjara, Atareb, Sarmada, and jisr al-Shougour located in the opposition held areas. Syrians protested against the Russian airstrikes and the Assad regime forces attacks on Idlib province, condemning the international community’s silence and Turkey’s policy regarding the Assad’s recent advance on areas that Turkey has guaranteed by Turkey under Astana and Sochi agreements.

Besides, Verify platform reporter in Idlib has confirmed that no shootings by live bullets at civilians were reported in the areas where the demonstrations erupted, especially at the crossings. However, tear gas canisters, water cannons, and rubber bullets were fired to disperse the demonstrations from the Turkish side of the border.

In addition, our reporter said officials responsible for the crossing’s safety from the Syrian side of the border tried to block entry of protestors, but they could not because of the huge crowd. He added that they did not shoot at the protesters, but they fired into the air to disperse them.

Verify platform reporter denied the news of protestors reaching the Turkish town of Reyhanli. He also denied the claims that protestors took over a Turkish Gendarmerie vehicle.

Ammar al-Jaber, media professional and Einjara demonstration coordinator, said that the protests clearly aims to stop the military campaign carried out by Assad and Russian airstrikes on the opposition-held areas in northern Syria. He added that they also demand the Turkish guarantor to assume its responsibilities towards civilians in Idlib and Hama countryside.

Thousands of protestors gathered at the Bab al-Hawa and Atmeh crossings, and near the Syria-Turkey border, demanding Turkey to assume its responsibilities towards civilians in Idlib and Hama countryside.

Of note, the fourth round of the Astana negotiations, on May 4, 2017, the “de-escalation zone” was announced. The agreement stipulated that Turkey would be the guarantor of the opposition-held areas; as a result, Turkey established military posts in these areas. While Russia and Iran would be the guarantors of the Assad held areas.

Russian-backed Assad forces seized control of areas included in Astana agreement, despite the cessation of hostilities and the ceasefire declaration. The military campaign resulted in 1,300 deaths, 2,000 others wounded, and over a million people displaced.