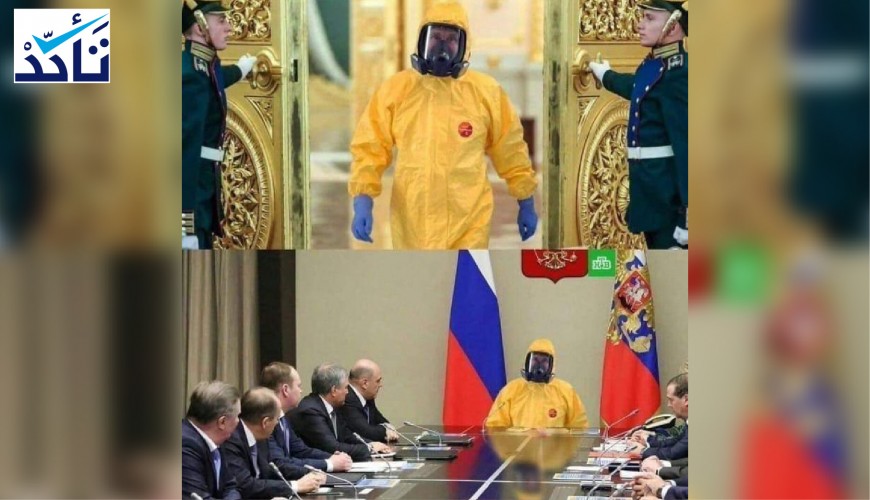 Did Putin Wear a Hazmat Suit in Meeting with Russian Officials?

Two photos of Russian President Vladimir Putin wearing a yellow full-body hazmat suit, also known as a decontamination suit, have been circulated on social media. It’s been claimed that Putin wore the suit during a meeting with Russian officials.

Tweeter @fatimaalwahsh posted the photos with a text that reads, “#Putin chairs an important meeting with Russian regional governors while wearing a decontamination suit 🤣🤣 #coronavirus.” An archived link to the tweet.

A Facebook user named “Heba Sayed Elhrery” has also posted the photos claiming they show Putin in a meeting after visiting an isolation hospital. An archived link to the post.

Verify-Sy Platform fact-checked the photos and found they have been altered using a photo editor. Putin’s normal suits which appear in the original photos were replaced with photos of him donning a protective suit and respirator. One of the photos dates back to Han. 20, 2020, in which he appears in a meeting with members of the Russian Security Council, according to Russian News Agency TASS.

The second photo shows Russia’s president as he enters a hall of the Kremlin Palace. TASS published the original image in March 2017 in a report on one of Putin’s addresses.

A photo of President Vladimir Putin donning protective gear while walking at the Kommunarka hospital on the outskirts of Moscow where patients infected with the novel coronavirus, or Covid-19, are being hospitalized was tweeted by the Official account of Russia’s Ministry of Forgein Affairs.