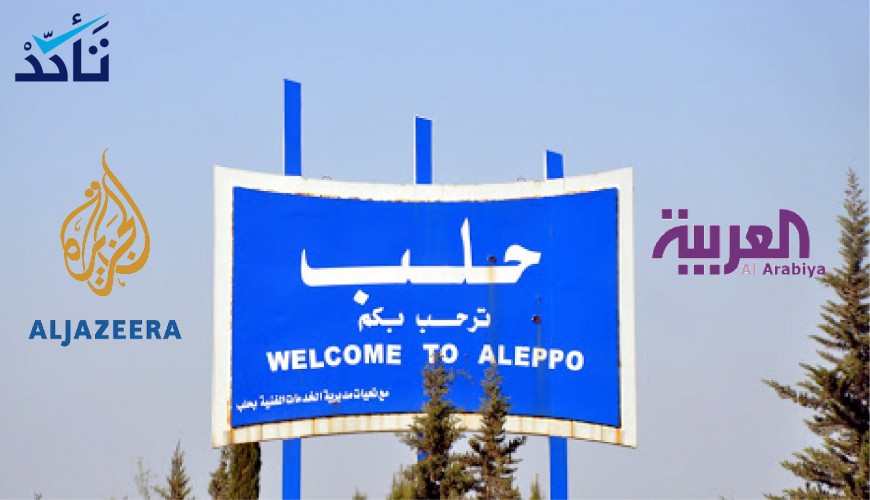 Two major Arabic-Language TV channels have claimed the Russian-backed regime of Bashar al-Assad has captured the whole province of Aleppo, after launching ground and aerial offensive followed by withdrawal of Syrian opposition factions from towns and cities in northern Syria.

In a news report titled “Assad Regime Forces Captures All of Aleppo City,” Al-Jazeera, a Qatari pay television news channel, said “the western and northwest countryside of Aleppo is under the control of the Syrian regime,” then, at 0:49, it has claimed that “during the past few hours, the regime gained complete control of Aleppo province,” displaying a map of Aleppo coloured in  yellow, which suggests the whole province is controlled by one party. An archived copy of the report is available here. 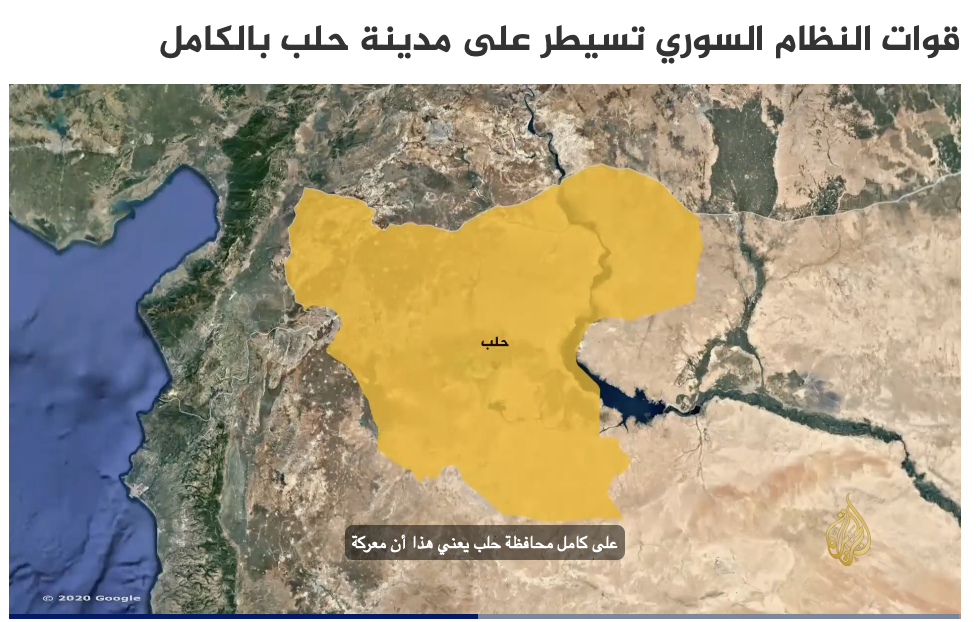 A screenshot of the Al-Jazeera news report that has claimed the Assad regime has captured all of Aleppo province. / 17 Feb. 2020

Besides, Al-Arabiya, a Saudi pay television news channel, has also made the same claim in its report, “Aleppo Is In the Grip of the Regime.. Mined Operation and Suspicious Turkish Role.” The report talks about Turkish President Recep Tayyip Erdogan’s statements on the Russia-Turkey relations regarding the developments in Syria, then it reports on the rapid progress made by the Assad forces in the surroundings of Aleppo, claiming that “all [Aleppo] province has been completely secured, with no presence of combatants after more than eight years.” An archived copy of the report is available here.

Despite the fact that the Assad regime has captured key towns and cities over the past two days in western and northwestern countryside of Aleppo, half of the province is still out of its control to date.

The information collected by Verify-Sy Platform from different sources, including our reporters and field sources in northern Syria, suggests that over 45% of Aleppo province is not controlled by the regime, including towns and cities controlled by the armed opposition, with the support of Turkey’s army, over the past four years along the Syria-Turkey border in northern and northeast Syria.

In addition, the armed opposition still controls parts of western Aleppo countryside, which are the al-Atareb and Daret Ezze cities and the surrounding villages. Therefore, over 20% of Aleppo province is controlled by opposition factions.

Furthermore, the U.S.-backed Syrian Democratic Forces, also referred to as the SDF, controls cities, towns, and large areas on the eastern and western banks of the Euphrates River near the Syria-Turkey border, such as the city of Manbij and Ayn al-Arab/Kobani. The SDF also controls Tal Refaat and Menneg in the northern countryside of Aleppo. Approximately, it has control over 22% of the province.

Liveuamap, a platform specialized in covering conflicts around the world in real-time, shows the areas captured by the Assad regime coloured in red. On the other hand, areas controlled by the Syrian opposition are displayed in green, including the areas seized during three cross-border military offensives conducted by Turkey and Turkey-aligned opposition factions, which are “Operation Euphrates Shield,” “Operation Olive Branch,” and “Operation Peace Spring,” in addition to cities and towns in western Aleppo countryside that have been outside of the regime’s control since the early beginning of the Syrian Revolution. Also, the SDF-controlled areas are shown in yellow. 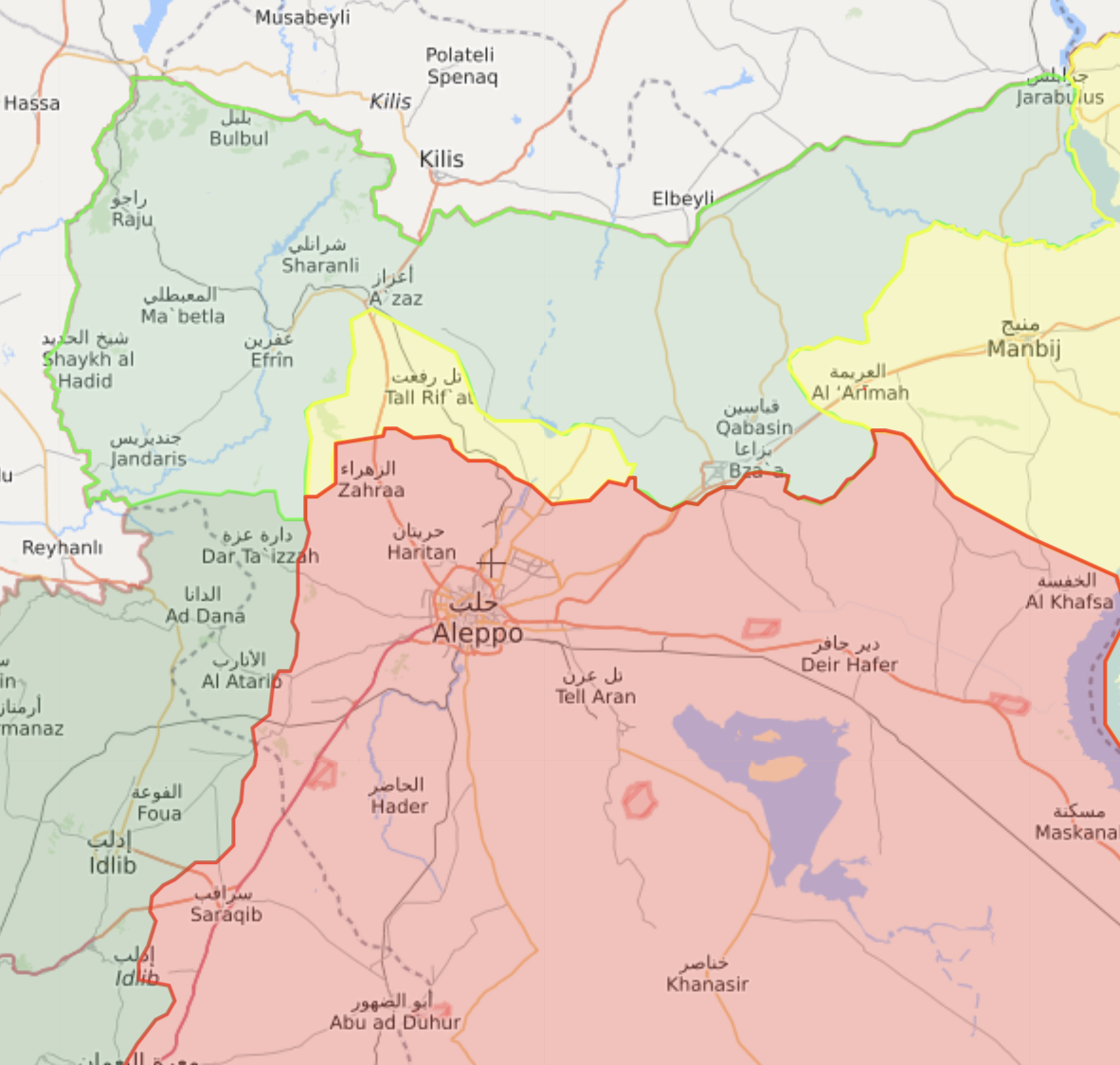 A screenshot of Liveuamap interactive map which shows the different parties that control Aleppo province. / 17 Feb. 2020.

Another detailed map prepared by Verify-Sy Platform on Feb. 18, 2020, confirms that the Assad regime has seized control of 52% of Aleppo province, while opposition factions controls around 23%, and the SDF controls the remaining 25%. 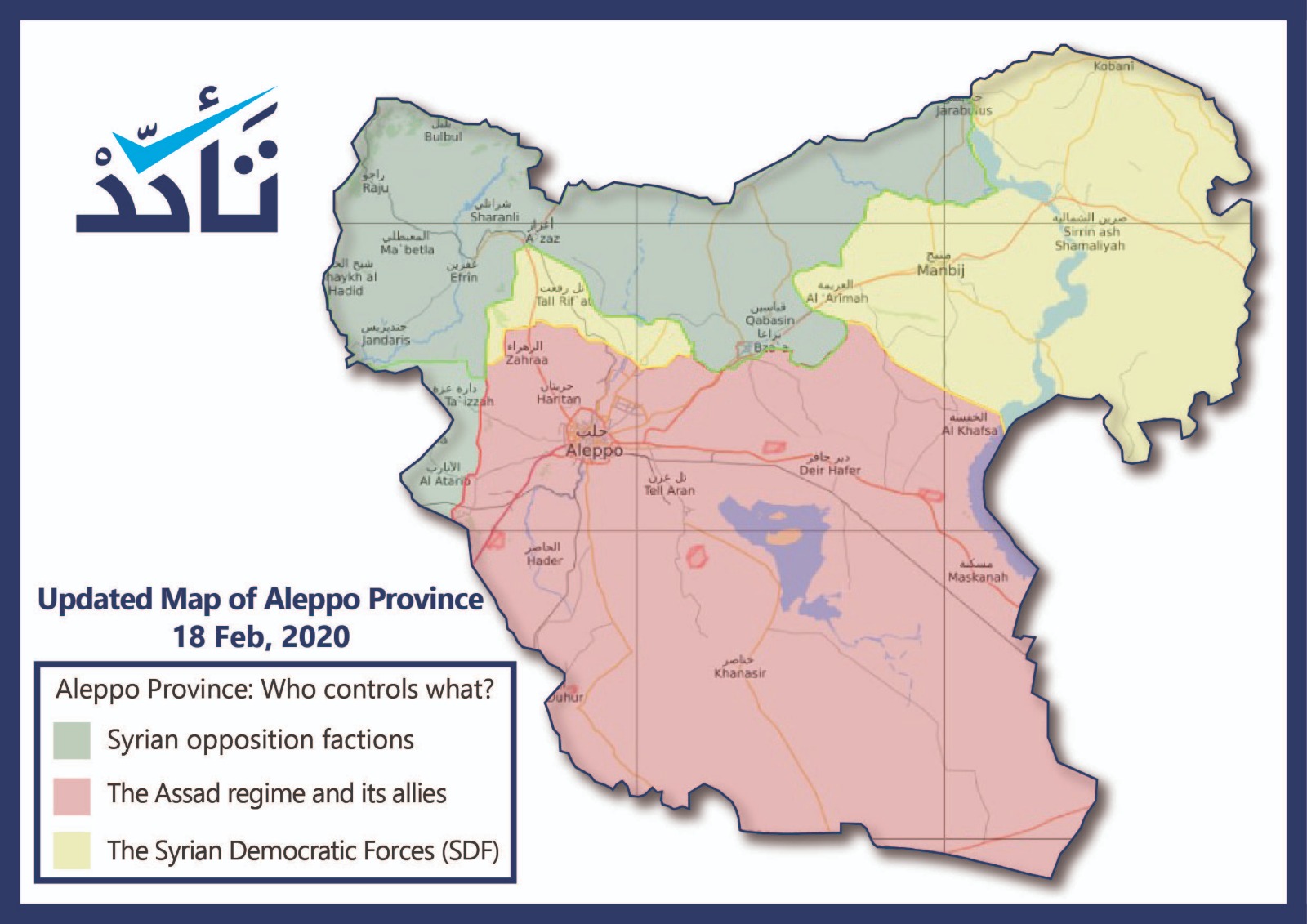