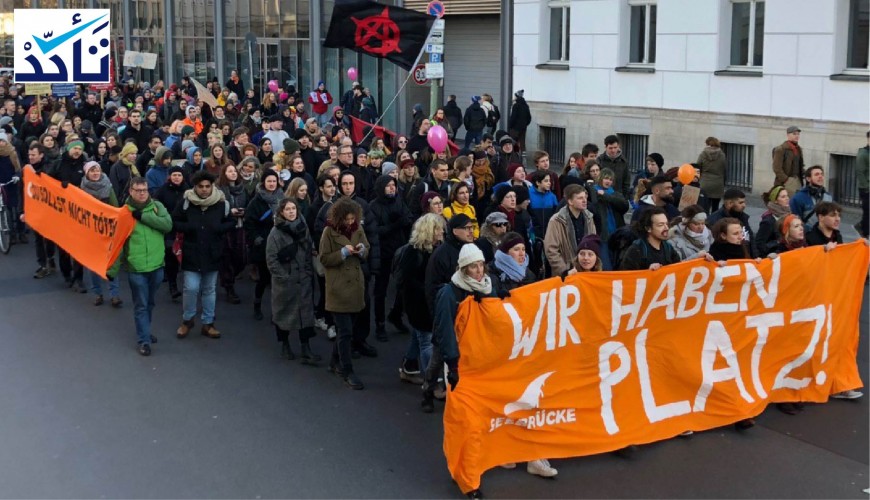 A video of a man filming himself among German-speaking protesters has been circulated on social media last Monday. The man appeared in the video saying that this protest calls for taking in Syrian refugees from Idlib.

Tweeter @Darin_ALabdalla posted the video with a text that reads, “Berlin demands taking in refugees from Idlib. They know that what is happening in Syria is neither a civil war nor a sectarian war nor a revolution of hunger. It is a popular, national revolution for rights. They know better than some Syrians themselves who claimed to be on the side of the revolution. One and half a million Syrians reside in Berlin, none of them live in a tent.” The tweet has over 330 likes and 105 retweets.

Facebook account named “Haitham Abdullatif Ayoun al-Soud” posted the same footage with a text that reads, “This is Germany. These are the good-hearted people. Berlin demands bringing refugees from Idlib to Germany, in which over 1.5 million Syrians live high-quality life. Germany is not like Turkey, which was given 40 million dollars for refugees and has traded in our women, children, weapons, and blood on political and military levels. It took our young men to die in Libya. We fought our own people. The ‘infidels’ live here. This is not the Ottoman Caliphate.” This post has over 2200 reactions, 340 comments,  and 570 shares.

Verify-Sy Platform fact-checked the footage and, after comparing it with the events that took place in Berlin last week, it turned out it shows a protest that took place on Feb. 8 under the title, “Wir haben Platz” (We have space), organized by the Seebrücke international movement that demands safe escape routes for refugees.

What is the false information that has been circulated?

The solidarity group did not mention the Syrian city of Idlib or Syrian refugees in their announcement for the protest, which was posted in many languages including Arabic. In fact, their action aims to press for the evacuation of 4,000 unaccompanied minor refugees from the Greek islands and immediately resettling them to Germany, without specifying the minors’ countries of origin.

Seebrücke Twitter account posted photos of the protests in which a woman holding an orange banner appeared, the same woman who appeared in the viral video; the banner reads, “Wir haben Platz,” or “We have space,” referring to the readiness of receiving refugees.