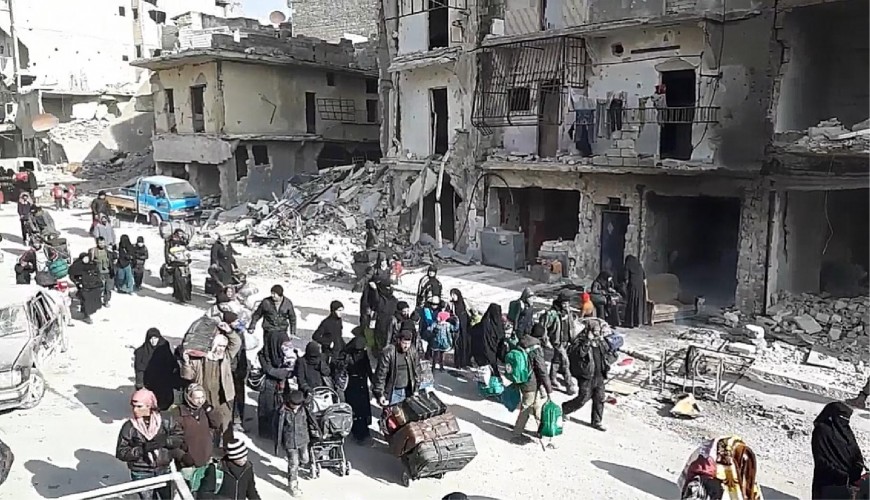 Several Facebook accounts have recently circulated footage that shows hundreds of civilians, including women and children, fleeing an area of great destruction. Civilians appear in the video carrying their belongings and heading towards randomly-parked vehicles.

A Facebook account called “Ahmed Nehad Alkhaled ” has shared the video with a text that reads, “Maarat al-Numan. I have no words.”

This comes as the Assad regime and Russia have intensified their offensive against the city of Maarat al-Numan. The vicious offensive has sent tens of thousands fleeing.

Verify-Sy Platform fact-checked the footage, and found that it is an old video that shows the displacement of the residents of eastern Aleppo back in late 2016, after these neighborhoods were besieged by the Assad regime and its allies

The Thiqa Agency originally published the footage on December 12, 2016, titled, “Civilians Continue to Be Evacuated from Besieged Districts of Aleppo to Western Parts of Rural Aleppo.”

Verify-Sy reporter has confirmed that most of the residents of Maarat al-Numan of Idlib and its surrounding villages had fled the area over the past few days, heading towards the northern parts of rural Idlib near the Syria-Turkey border, due to the military offensive launched by Assad and its Russian ally. Consequently, the Assad regime has seized control of several strategic cities and towns, the most prominent of which are the Jarjanas town amid fierce battles taking place up until now in the area.