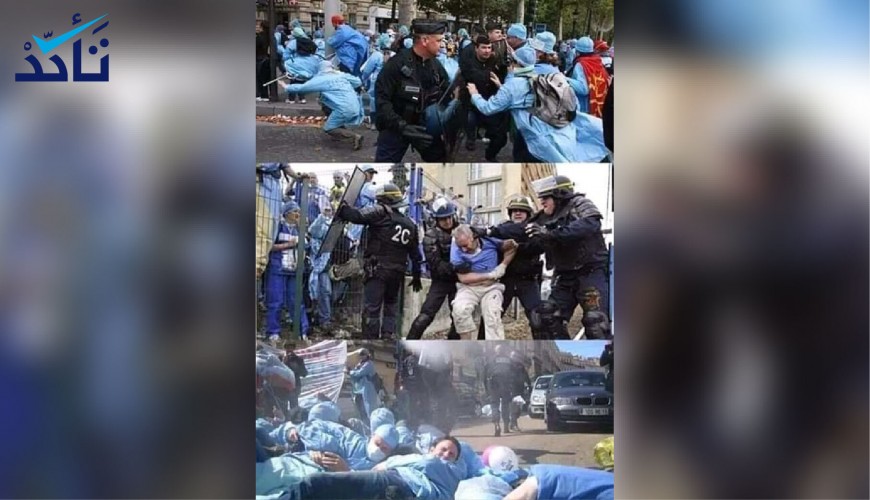 Activists on social media have recently circulated news that France had forced French citizens of foreign origins to leave hospitals to make room for citizens of French descent, posting pictures of police violence against protesters and police-protester skirmishes.

A Facebook profile named “Yahyaoui Chaker” posted the news and the three photos with a post that reads, “The true face of France: France forces naturalized citizens out of its hospitals to make room for the French people. Cosmic values came to an end in times of death.” The post has been shared over 1200 times.

A Twitter user named “Ahmad Abu Shawish al-Hayyani” repeated the same claim with the same pictures in a tweet on Tuesday April 14.

News is Unsourced, Photos are Unrelated to Covid-19 Crisis

Verify-Sy searched for the claim that French authorities had forcibly discharged French citizens of forgein origins from hospitalis to make room for French citizens of French Descent and found that the news is unsourced and hasn’t been reported by any reliable news source. It has only been published by some social media users who cannot be considered as reliable sources of information.

Furthermore, the photos posted with the news are not related to the Corona pandemic. A reverse image search with suitable keywords found the photos date back to 2010, when strikes and demonstrations had occured in France’s capital, in which hospital staff had participated.

The first photo was published on October 7, 2010, in a report titled, “Nurse Anesthetists on Strike,” on the New Anticapitalist Party’s website.

According to the World Health Organization (WHO), the death toll in France from the Covid-19 outbreak has risen to 17,920 by today morning. The confirmed cases nationwide exceed 108,800, while 32,812 people recovered from the virus.